Books
I Don’t Forgive You 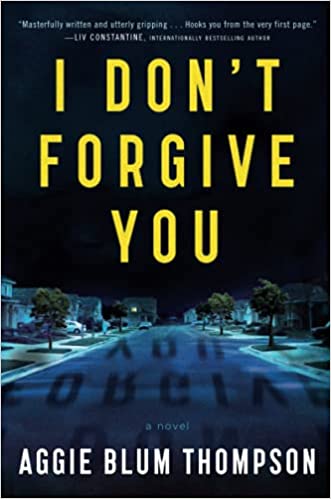 Up-and-coming photographer Alexis “Allie” Ross has just moved to a new house in the suburbs close to Washington, DC, with her husband Mark, and her five-year-old son Cole. The area is full of well-off families who form into cliques and tend to be competitive about their children.

Attempting to fit in, Allie attends a neighborhood party, but everything goes wrong when one of the dads at the party calls her by her old nickname “Lexi”—which she hasn’t used since her traumatic high school years—and gropes her. Angry and humiliated, Allie leaves the party, but is in for a shock the next day when word comes that the man who assaulted her, Rob Avery, has been murdered.

The police quickly turn to Allie as a suspect, and she is horrified to learn that someone has hacked her social media account, made up online profiles in her name, and that Rob Avery had been communicating with this impostor for months. Now the police believe Allie and Rob were having an affair and exchanging provocative messages online—and that she’s the most likely person to have killed him.

Allie must find a way to prove the online posts are not hers and that she is being framed for murder. To do that, she must delve into her painful past and confront why someone wants to destroy her life. In the meantime, the neighbors gossip about Allie, lewd pictures of her are shared online, even relations with her husband become strained.

Allie increasingly struggles to save her career, social life, marriage, and motherhood, which are all at risk of becoming lost to her for good. Meanwhile, the real killer is far from finished with the plot to ruin Allie’s life, and the obstacles she faces multiply as the reader gets closer to the truth.

I Don’t Forgive You is a gripping mystery with enough plot twists and red herrings to befuddle even the most astute mystery readers. The characters are multilayered and well developed, and the idea that someone can use social media to wreak such havoc will resonate with readers, especially those who have faced similar types of harassment. I Don’t Forgive You blends several story threads together—Allie’s past, the murder, cliquish neighborhood dynamics, Allie’s relationships with her husband and son, and the effect that the investigation has on each of them. Allie’s struggles become overwhelming, but her determination to keep going despite them is inspirational. All in all, this is a mystery/ suspense novel that will pull readers in and keep them hooked until the final page.