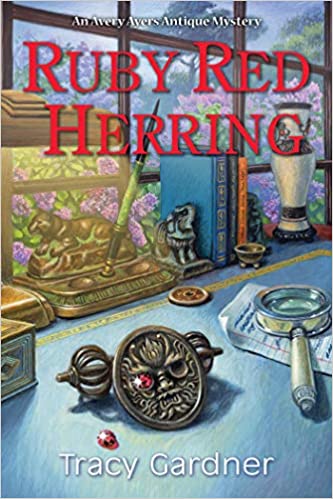 In author Tracy Gardner’s Ruby Red Herring, the first book in her new Avery Ayers Antique Mystery series, readers are introduced to the twentysomething antique appraiser Avery Ayers. She’s taken over the family business after the death of her parents in car crash that nearly killed her and her younger sister Tilly—and Avery is still dealing with the trauma from the accident.

She and her partners at the Antiquities & Artifacts Appraised are authenticating and appraising a rare ruby that has come into the possession of New York’s Museum of Antiquities. The ruby may be connected to a Chinese medallion that is on display at the museum and it would be a huge feather in the cap for both the museum and Avery’s business if the gem turns out to be the genuine article.

However, work has barely begun on the project before Avery is getting mysterious warnings to drop the job. Someone is playing games, making threats, and worse yet, trying to make it seem like her father might actually still be alive. And just who is this mysterious museum guard that yet another anonymous note tells her she can trust?

Refusing to take the bait or be warned off the job, Avery becomes the target of a series of attacks that bring the threat home in a more direct manner.

Set against the insular world of rare antiquities, Ruby Red Herring features a winning protagonist who is a determined woman finding her way amidst an unthinkable personal tragedy. It’s not just Avery making this story soar, though. Her Aunt Midge, sister Tilly, and her coworkers Micah Abbott, and Sir Robert have such strong personalities of their own that they quickly become more than just supporting characters.

As for the overall plot, to say the story lives up to its title, providing any number of twists and a colorful suspect pool, would be an understatement.

While it may be tempting to compare this series to ones by Ellery Adams or Jane K. Cleland, I think Ruby Red Herring distinguishes itself quite nicely by mixing the expectations of a cozy series with the somewhat darker and more intense aspects of a thriller. This is a lightning bolt of a series debut that will have readers clamoring for more.