Books
The 22 Murders of Madison May 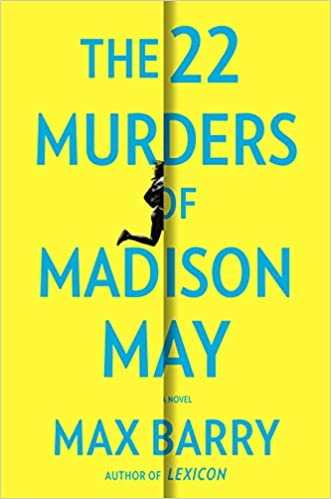 Max Barry, author of the cult hit Syrup, returns with another standalone, The 22 Murders of Madison May. Your average mystery novel usually apportions one death per victim, but here, as the title gives away, the graphic death of the titular Madison in the opening scene won’t be her last. Her killer, stalker with a crush Clayton Hors, has the ability to “move” between alternate realities. Each time he moves, he searches out Madison yet again, and each time she fatally disappoints him.

Our protagonist, Felicity Staples, is the kind of intrepid reporter who is rapidly becoming obsolete with print news on the downturn. When the story of Madison’s murder drops in her lap, she almost immediately notices that something is out of kilter at the brutal crime scene. After trying to apprehend Hors herself, she finds herself caught up in a multiverse game of cat and mouse.

Neither Felicity or Maddie are ever really fleshed out as characters. Maddie is a different person after each move, and the narrative leaves the old one behind, often dead or dying. Only the final Maddie gets the chance to shine, and even then she doesn’t get too much time to do it. Felicity has similar challenges, as each move across realities puts her back at square one. She spends much of the novel confused, figuring out what’s happening along with the reader, becoming our stand-in with a little extra bite.

As fantastic as the premise is, Hors himself is a very credible type of killer. Before he ever met Maddie, he saw an image of her that he romanticized into his ideal woman. When the flesh and blood person doesn’t live up to his impossible standards, he kills her and continues the search in the next reality. The real horror isn’t the magic involved itself—it’s that anyone could know a Clayton Hors. The author makes no attempt to humanize, sympathize, or redeem Hors and that’s for the best. He’s a villain, through and through, and being made to answer for his crimes is the least he’s owed. Even if that answer has to cross time to be heard.