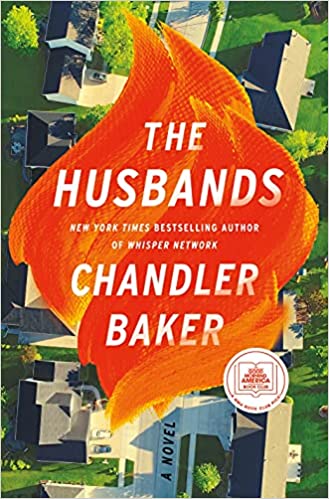 Like many career women who also have families, Nora Spangler is stretched too thin—not only is she trying to make partner at her law firm, but she’s also responsible for all of the domestic responsibilities, including caring for her toddler and the house while three months pregnant. Though her husband supposedly “helps” around the home, she is tired and resentful of shouldering most of the burden.

While house hunting, the Spanglers find what seems to be the perfect neighborhood in Dynasty Ranch—not only does Nora love the house, but all of the women who live there are hugely successful in their careers while their husbands obsessively cater to their every need. The fact that they want to hire her to take on a neighbor’s wrongful death case—a woman’s husband mysteriously died in a fire—doesn’t hurt her career options either.

While the creep factor is high—the men are basically Stepford Wives in male form—it takes a long time for the reader to find out what’s really going on beneath the surface of Dynasty Ranch. In the meantime and despite the fact that her husband is well-intentioned and trying to help (though never meeting her standards), Nora carps endlessly about how put-upon she is. While her frustration is understandable, the important issue of gender equality and the truth that women spend almost twice as much time on unpaid domestic work than their male counterparts, becomes lost in the noise of Nora’s victimhood.

The author, who has two small children and works as a corporate attorney, says in her author’s notes that she chose to write about these issues after facing them on her own, and the book feels very personal for that reason. Luckily for her husband, the solution that works so well at Dynasty Ranch isn’t a possibility in real life—though a lot of long-suffering wives might wish that it were.