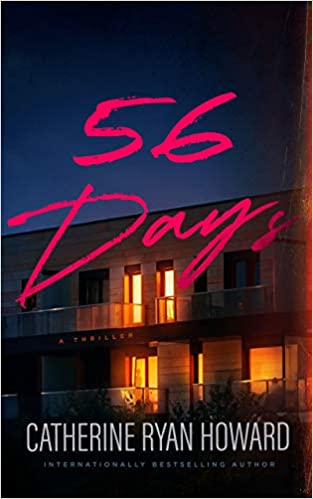 In 56 Days, a young couple just getting to know one another tests their relationship by moving in together during the pandemic lockdown. But long-hidden secrets soon prove more dangerous than COVID-19.

Set in Dublin, the book opens with Ciara and Oliver, both attractive and mid-twenties, meeting in a supermarket. An apparent space enthusiast, he notices she’s carrying a canvas tote bag featuring a space shuttle, which leads to a chat about the Kennedy Space Center, which leads to a cup of coffee. Next comes a date and a sexual encounter. Not long after, as much of the world’s population is urged to hunker down, the duo decides to share his apartment.

Irish author Catherine Ryan Howard adroitly depicts the ominous and collective loss of normalcy as Dublin shuts down. Oliver and Ciara stock up on supplies and figure out who’ll work where within the confines of his posh apartment.

But in alternating chapters, they each disclose confidential concerns about the other. Why doesn’t Ciara have any presence on social media, wonders Oliver. Why does the asthmatic Oliver have no inhalers anywhere, questions Ciara. “Lies are spindly, unwieldy things. Delicate filaments, like bundles of nerves in the body. Easy to twist, hard to control, impossible to keep hold of,” reflects Oliver. The description of Ciara’s phone screen is an early tell. It’s a quote by Abraham Lincoln: “Discipline is choosing between what you want now and what you want the most.” To say anymore would require a Spoiler Alert.

A tale with a shuffling timeline, as well as shifting narratives, 56 Days is sometimes jarring and repetitive—via the he said, she said scenarios—as ulterior motives are methodically revealed. Interspersed with their story is that of a pair of not especially likable cops, investigating the discovery of a body.

As to whether readers who’ve spent the past year in lockdown themselves will want to read about a couple in quarantine, well, that’s a whole other mystery. Time, and sales figures, will tell.