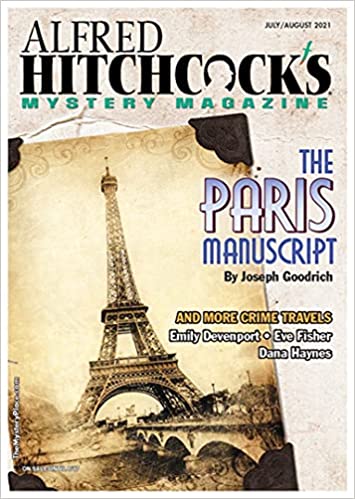 The latest issue of Alfred Hitchcock Mystery Magazine (July/August, 2021) features its usual wonderful array of criminous content. The spotlight story is the winner of AHMM and The Wolfe Pack’s Black Orchid Novella Award: “El Cuerpo en el Barril,” by Tom Larsen. A murder mystery, in the style of Nero Wolfe with a splash of Columbo, featuring an aging, overweight, socially awkward Captain in Ecuador’s Policia Nacional named Juan Delgado. The captain has been transferred, with a never quite defined cloud over his career, to the small and hot Ecuadorean coastal city of Manta. Before Delgado can escape the mandatory, and somewhat humiliating meeting with his new boss, a body is found near a church. Of course, it is murder, and Delgado along with his uneasy sidekick, Sergeant Ortega, are tasked with solving it with as little fanfare as possible. A satisfying story with a smile-inducing conclusion, and more than a little humor along the way.

Albert Tucher’s “The Rabbi” is an almost too clever, but ultimately satisfying, tale about a long-ago romantic crush, a female cop, and an attempted robbery, all played out on Hawaii’s Big Island. “The Regular Nobody Knew,” by Bob Tippee, is a smoothly developed and mysterious story advising readers to tread carefully when stomping on the toes of strangers. Eve Fisher’s “The Sweet Life” is a tasty slice of suburban noir broiling with drugs and sex in the housecleaning business. Mary Taugher, Emily Davenport, Brian Cox, and Joseph Goodrich also contribute excellent stories.