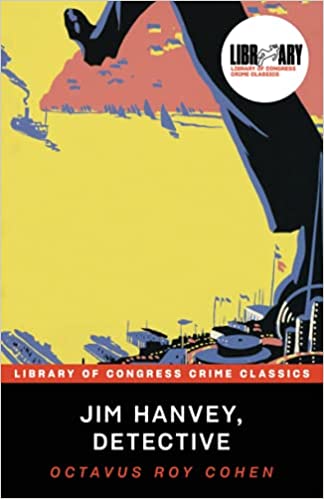 Jim Hanvey, Detective, edited by Leslie Klinger, is a Library of Congress collection of the largely forgotten Detective Jim Hanvey mystery stories written by Octavus Roy Cohen. Cohen was a popular writer in the The Saturday Evening Post in the 1920s, which is where the first Jim Hanvey tale appeared in 1922. In his excellent Introduction, Klinger quotes Ellery Queen’s description of Hanvey as, “[a] gargantuan figure with a huge chin and short fat legs.” Hanvey’s appearance as big, awkward, ugly, and rather dumb-looking, hides his formidable intelligence. He is the scourge of every working criminal, but those same criminals, as Hanvey is quick to explain, are his only friends. He understands his prey and they respect him because he plays fair—often warning them he is on their trail—but (sadly) they rarely listen and Hanvey’s business is, after all, catching crooks.

The seven novelette-length tales in the collection are complicated flimflams, cons, and thievery. Nary a murder anywhere. “Fish Eyes,” which is a nickname for Hanvey’s bulging and watery eyes, is an ironically-solved embezzlement scheme perpetrated by a trusted bank clerk. “Homespun Silk” is about a jewelry heist Hanvey solves over cigarettes and good conversation with the culprit. Cohen’s style is light and easy to read. The dialogue, and there is a bunch, is rich with early 20th-century slang. Each story is entertaining, but the collection is best read in small doses since Hanvey’s cases tend to wash each other out when binged.