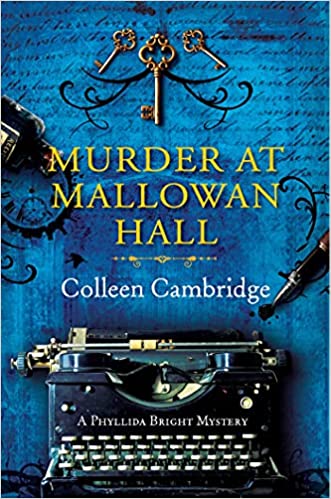 How does an author create a character? Little by little, showing the reader the traits of someone until there is a clear picture in their mind of who they are reading about. In the case of Colleen Cambridge’s Phyllida Bright the author sketches her in quickly: she works as the housekeeper for Agatha Christie and her husband, Max Mallowan.

As the book opens, Mrs. Bright discovers a body in the Mallowan’s library, right in the middle of a house party. The dead man was a reporter who had showed up late the night before, saying he was there to interview Mrs. Christie. Mrs. Bright pulls herself together (she’d been a nurse during the war) and before she even notifies the butler (gasp) she calls the police.

This book is a delicious combination of Downton Abbey and a meta-play on a Christie novel (obviously, The Body in the Library). The Downton Abbey bit is Cambridge’s attention to 1920's domestic detail and the way Mrs. Bright runs the household.

What does an under-scullery maid do? A footman? A simple maid? A chauffeur? If these are questions that interest you, Cambridge has your number. As Mrs. Bright goes about her business, not only as a housekeeper but as a detective, her personality and character are revealed through the ways she manages the household and the way she decides to investigate the crime herself, finding the police hopeless at their jobs. She uses Hercule Poirot (who better) as her template and gets right to work.

Thus, without tedious explication, the reader discovers that Mrs. Bright is precise, intelligent, and reliable, and to the horror of the butler, likes cats, chintz, and lace. Instead of dressing in drab colors, she prefers to wear bright ones and her hair is a glorious golden color, something that also horrifies the butler, who feels servants should be invisible. Phyllida is friends with Agatha, and the two meet up for a morning cuppa every now and then before Agatha—or Mrs. Agatha as the household refers to her—gets to work.

In true Christie fashion there’s more than one murder and more than one red herring. Mrs. Bright wraps things up almost despite the police, though they help detain the villain at the end. Cambridge, a pen name for a prolific writer who has to her credit several series across several genres, is a total pro who knows how to tell a story and populate that story with appealing characters. Agatha Christie the character plays a very peripheral part in the proceedings, but Agatha Christie the writer haunts every page of this delightful book that both pays homage to the Queen of Crime, but also embroiders on her work with a fresh character and a fresh look at a part of her life. This is a wonderful series debut.