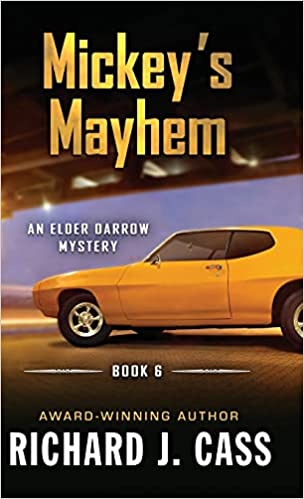 Running a bar isn’t a strategy most well-intentioned alcoholics would adopt in their quest to stay sober, but it works for the fortysomething protagonist of Richard Cass’s Elder Darrow mysteries.

Cass’s sixth-in-series, Mickey’s Mayhem, sees Elder vacationing with his girlfriend, Susan Voisine, when the phone rings. To Elder’s surprise, the caller isn’t Isaac Belon, whom Elder left in charge of his jazz club, the Esposito, but gangster Mickey Barksdale. Per Mickey, their “mutual friend” homicide detective Dan Burton is in trouble. “He doesn’t know I’m sticking my nose in here,” Mickey warns, “and I don’t want him to. Understood?”

Elder immediately returns to Boston, where he finds Burton distraught over the death of his ex-fiancée, former Esposito cook Marina Antonelli. Though Marina overdosed on heroin, Burton suspects the drug wasn’t self-administered. Mickey confirms as much to Elder, but advises that he keep Burton from investigating: “other people are taking care of it,” Mickey swears, and Burton will just muddy the waters. The waters, of course, become downright turbid, despite Elder’s best efforts.

Cass writes Boston with an affection born of familiarity, adding texture and atmosphere to the gritty plot. The cast is stocked with intriguing characters embroiled in increasingly thorny relationships, many with roots in earlier books. Readers previously unacquainted with Elder will find this sequel to 2020’s Sweetie Bogan’s Sorrow an easy series on-ramp, but those in the know will be richly rewarded by the advancement of several long-gestating arcs.