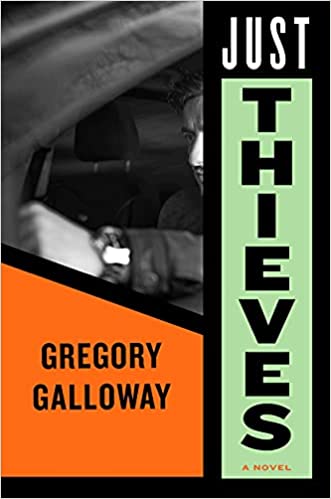 Gregory Galloway’s Just Thieves follows Rick and Frank—two career burglars who met in rehab five years ago and have been partners ever since. Frank does recon and circumvents bothersome technology, while Rick handles the breaking and entering. They never steal anything big, nor do they steal for themselves; rather, an intermediary named Froehmer identifies a coveted object, and they retrieve it for him in exchange for a modest fee.

Their current job is unusual in that it requires a trip to the city, but Rick still manages to enter the target house and extract the seemingly worthless item—a cheap silver trophy—sans mishap. As they’re fleeing the scene, someone T-bones their rental car.

Both men are fine, so Frank sends Rick back to their hotel with the loot while he deals with the cops. When he’s finished, Frank suggests they hop a bus and head home, but Rick protests, as they’ve already paid for the room. Rick wins, but when he wakes the next morning, Frank and his stuff are gone—as is the trophy.

At once a breathtakingly nuanced character study and an intricately crafted crime novel, Galloway’s latest rivets while meditating on matters of fate and free will. The tale unfolds somewhat circuitously via Rick’s rueful first-person narration, his frequent pauses to reflect upon what brought them here both heightening tension and infusing profundity. This is pitch-black noir with a shining heart of battered gold, and it’s certain to win Galloway legions of new fans.