Books
As Marriage Can Be Mischief 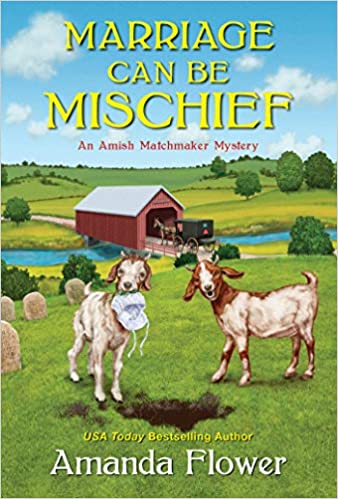 The busy Amanda Flower (author of 10 series, six active) gifts us a visit with Amish matchmaker Millie Fisher, who makes a living as a quilter. As Marriage Can Be Mischief kicks off, Millie is wondering just how long her childhood friend Uriah Schrock will stay in town. He’s absent at the opening concert scene and it’s only later that Millie discovers where he’s been. Millie is widowed and lives on her own with a couple of goats (that she takes for walks) and a cat (that she doesn’t).

Forty years ago, Uriah’s sister disappeared after her husband was discovered murdered. It’s widely thought the sister escaped an abusive marriage and ran away to be “English” (i.e., non Amish). However, two filmmakers using a drone discover a human skull which does, in fact, turn out to belong to Uriah’s long-missing sister. While Uriah now knows that she’s dead, he still doesn’t know what happened, and Millie, known as the “Amish Marple,” and her English sidekick, Lois, are determined to find out. The police are content to call it an accident, but Millie is positive that’s not the case.

Her relentless sleuthing gives readers a trip to a busy Amish restaurant, a buggy shop, and a quilting bee, all of which illuminate the Amish culture and advance the plot. There’s a matchmaking plot thread on the side as Millie settles differences between a prospective young couple with doubts on the part of the future groom. The detective work is intelligent and the clues are fairly laid. Though the suspect pool is small, I was unable to guess the killer. I loved the character of Millie, who in her sixties is happy to live on her own with her goats and her quilts.

Flower has that special sparkle that some writers possess—that magical quality that makes the plot, characters, and setting fly through your reading fingers as fast as you can turn the pages. She makes her situations and characters truly come to life with a depth of emotion behind her characters that make them memorable. This is a wonderful read.