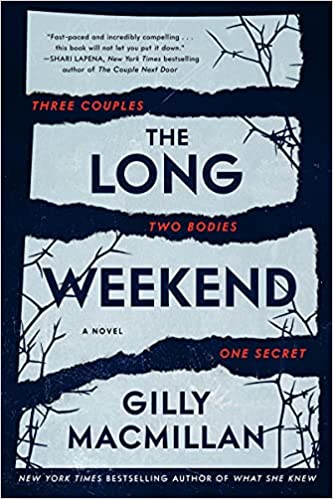 The latest standalone by Gilly Macmillan, The Long Weekend, isn’t your standard closed circle mystery. Instead of being on a faraway island, a train, or high on a mountain top, Macmillan’s characters find themselves in a remote barn in the middle of nowhere. And because things never go right in stories like these, the start of the weekend begins with three women driving up to their annual couples getaway together without their husbands, who can’t make it immediately.

Straight-laced Jayne and flighty Ruth have been friends a long time, but feisty new bride Emily is an outsider and making little effort to change that. They’re also feeling the absence of their friend Rob, who recently passed away, and his wife Edie, who couldn’t bear to join their annual holiday without him. The evening promises to be an awkward one. Naturally, it goes from bad to worse.

Waiting for them on the table is a package with a carefully written note. In it, the not-so- mysterious E tells them that she’s leaving to start a new life—and that she killed one of their husbands before she left. The wives, now deep into the countryside, have no cell service, no internet, no easy way back to their host’s farmhouse and, oh, by the way, a violent storm is rolling in. Jayne and Ruth know Edie to be a trickster and a lover of all things dramatic. So did she write this note just to ruin their holiday without her, or is someone really dead? As the wives stay in limbo, the narrative quickly makes it clear through the killer’s perspective that someone has, indeed, been murdered.

Macmillian’s dark homage to the 1949 Joseph Mankiewicz film A Letter to Three Wives kicks off with a bang and just keeps the twists coming. Set mainly over the course of three days, the breakneck pace only slows down long enough to inspect each of the wives insecurities in turn and reveal how fragile their relationships really are. These are flawed, very human women who immediately commence arguing, breaking down, and getting nearly nothing done. On top of everything, their host, John Elliott, is suffering from delusions and may be dangerous as he wanders around in the dark. In probably the most nail-biting portion of the plot, Rob and Edie’s daughter Imogen also finds herself hitched to the murder train whether she likes it or not.

Macmillan is a veteran of tales where the past comes back to haunt characters in full force, and The Long Weekend is no exception. If there is any fault in the tightly plotted story, it’s that more attention isn’t given to the husbands and their childhood friendships that started it all. The men spend very little time on the page, and what we learn of them comes secondhand—portraits tinted by the lies they’ve told and the emotions at the forefront of their marriages. It seems strange to leave these ties behind in the shadows, strong as the wives are as characters. Regardless, this is a solid entry into Macmillian’s blibliography, and it will keep reader’s guessing until the very end.