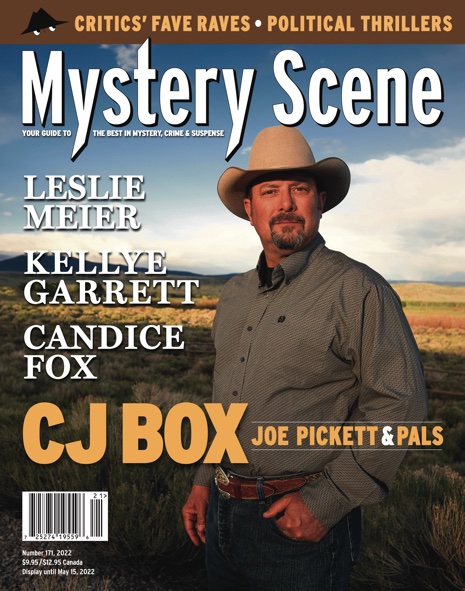 “The West is not filled with rubes and cowboys,” author C.J. Box tells Oline Cogdill in this issue. “I want to show the West but also this is a contemporary West.... It’s a real place with a lot of myths associated with it, but also a place of diversity and interesting people. Joe Pickett isn’t just a Western hero, he’s a contemporary Western hero.” Indeed he is, and Box’s huge audience is being enlarged by two TV shows: Joe Pickett and Big Sky.

Whatever side of the political divide you might endorse, you have to agree that political chicanery can liven up a story. In “Capitol Crimes,” Pat H. Broeske has gathered many recent and classic examples of political thrillers. One goes all the way back to Rex Stout’s anonymously published 1934 novel The President Vanishes. Stout’s biographer John McAleer commented that it “portrayed the dangers in the United States of a fascist takeover patterned on Hitler’s takeover of Germany, it was sold at once to Hollywood.” Other famous titles include Charles McCarry’s riveting The Tears of Autumn about the John F. Kennedy assassination and Richard Condon’s chiller The Manchurian Candidate about a brainwashed prisoner of war. Former president Ronald Reagan was an early and influential fan of Tom Clancy whose novels often deal with the clashes of political and military interests. Bill Clinton not only read voraciously in the genre throughout his presidency, he later collaborated with James Patterson on The President Is Missing and The President’s Daughter.

Former presidents aren’t the only well-known characters interested in crime fiction. In “Murder by the Stars,” Michael Mallory has identified an array of weathermen, newscasters, comedians, actors, talk show hosts, even a famous stripper, who aspired to add “mystery author” to their resumes. Some results are intriguing, others ill-advised.

Newcomer Kellye Garrett is bringing a fresh voice to crime fiction. She first wrote two cozies featuring a Black protagonist and then branched out into domestic noir. “Domestic noir,” says Garrett, “is full of white women living in suburbs who can’t trust their husbands, or their kids go missing, and that’s just not my reality. I’m a Black woman who’s single and I live in an urban area.... If I was in the suburbs and my baby goes missing, I’m going to be looked at in a different way than a white woman.” In addition to her fiction, Garrett helped found Crime Writers of Color with Walter Mosley and Gigi Pandian in June of 2018.

Australian crime writer Candice Fox has a goal. “[I’m] trying to create discomfort in the reader about ‘I really want to root for this guy, but I’m not sure if I can,’ and then they flip the pages to figure out if they can or not.” More and more readers around the world have been flipping those pages as the prolific Fox continues up the bestseller lists. Noted cozy writer Leslie Meier credits her former day job as a local journalist with giving her an ear for dialogue. “I also got to understand how a little bit of power on a committee can really go to a person’s head. That little insight has developed into quite a few of my plots.” she says. John B. Valeri talks to Meier in this issue.

Every December, I send a call out to our Mystery Scene critics asking for their “best of the year” choices. Each entry “should be a book/TV show/film/audiobook/short story you loved and found yourself thinking about long afterwards.” Then I sit back and wait for one of my favorite annual features to assemble itself. I challenge you to come away empty-handed from this dazzling selection.

Also in this issue, Lucy Burdette and Catherine Maiorisi offer entertaining “My Book” essays on their new work.