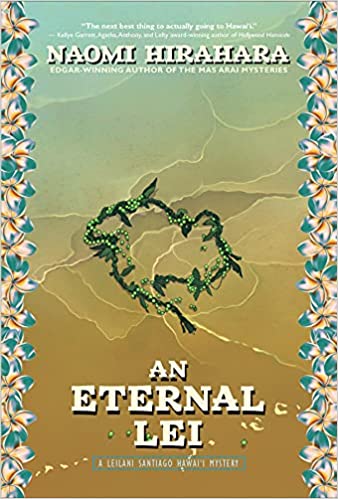 Naomi Hirahara’s timely second Kaua’i-based Leilani Santiago novel, An Eternal Lei, sees the 25-year-old’s plans to expand her family’s shave ice business foiled by the pandemic. Instead of opening a second location, she’s had to shutter their stand in Waimea Junction and rely on charitable donations to stock the overcrowded household’s cupboards.

All of Hawai’i is off-limits to tourists, so it’s a bit of a shock when Leilani’s younger sisters pull an unconscious female stranger out of Waimea Bay. The woman is barely breathing, so despite fears of contracting COVID-19, Leilani performs CPR until the paramedics arrive. The police then take custody of the woman’s distinctive lei, as it appears to have provoked an allergic reaction.

An absence of customers has left Leilani with ample free time, so she turns her attention to the lady she saved, who remains in a medically induced coma. What is Jane Doe’s real name, and how did she end up in the water? The more questions Leilani asks, the more feathers she ruffles, but she is determined to solve the mystery into which she’s stumbled, no matter the risk.

With a strong sense of place, community, and culture, Hirahara’s follow-up to 2019’s Iced In Paradise opens a window on a Hawai’i unseen by most mainlanders—one hit hard by coronavirus closures, where locals face food insecurity, unemployment, and homelessness. The book’s cast of characters is large and their intertwining backstories might occasionally confuse those new to the series, but the multilayered central puzzle rivets from start to kindhearted finish.