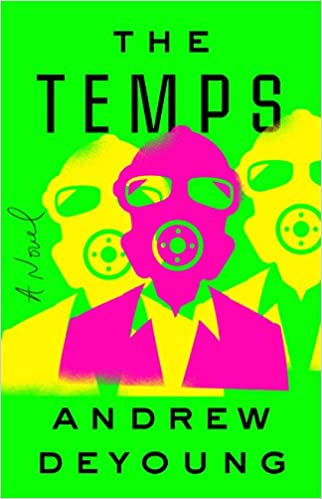 Andrew DeYoung’s thought-provoking new novel, The Temps begins with Jacob Elliot’s arrival at Delphi Enterprises to fill a temporary position in the corporation’s mail room. Jacob, a 25-year-old with an English degree, used to think he was destined for greatness. Now he just dreams of a steady job with benefits and an abode that isn’t his parents’ basement. Jacob doesn’t know what Delphi does, but aims to find out when his supervisor returns from an important meeting being held in the complex’s courtyard.

Only Delphi’s regular employees are invited to attend, so Jacob is watching through the window when a cloud of yellow gas settles over the crowd and transforms them into a murderous mob. Jacob retreats into the hermetically sealed building’s interior, where he finds 349 fellow temps, among them personality quiz-writer Lauren Aldiss, yoga instructor Swati Sidana, and research assistant Dominic Hill.

The phones don’t work, but before the TV networks go dark, Jacob and friends learn that the attack wasn’t an isolated event. The temps scavenge the offices and start rationing supplies in hopes of surviving until the air clears or help comes. But while some pass the time by partying, others spin wild conspiracy theories, inspiring Jacob to comb Delphi’s massive servers, searching for the answers.

Equal parts satire, mystery, and apocalyptic thriller, The Temps lulls readers with breezy prose and absurdist humor before yanking the rug out with a series of shocking twists. Vividly sketched characters and a kaleidoscopic third-person narrative add depth and warmth, resulting in an enthralling story that tempers cynicism with hope.