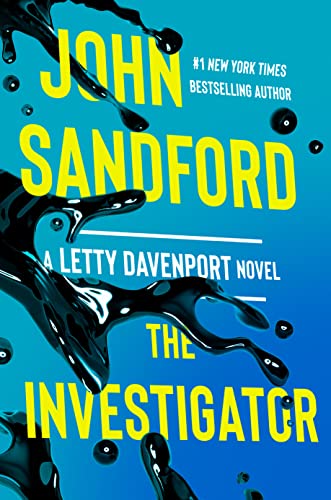 Readers first met Letty Davenport as a resourceful young girl growing up hard in the Lucas Davenport thriller Naked Prey. In author John Sandford’s The Investigator, Letty takes center stage. Long ago adopted by Lucas, she’s now in her mid-20s and working for a U.S. Senator in a job she finds less than fulfilling.

She’s ready to quit when her boss offers her a new assignment that will put her “in the field,” something that fits Letty’s skill set much better than a desk job. Teamed with skeptical John Kaiser, a former Army master sergeant who is ex-Delta Force, Letty sets off to Texas tasked by Homeland Security to track down answers behind complaints from oil companies about stolen oil. The investigation is just a cover, though. Homeland is less concerned about the missing oil than what the stolen oil money is being used for. There are rumors of a militia, a plot, and a mysterious leader.

As Letty and John search for answers, they soon find what they were looking for—and it’s a whole lot more than some stolen oil money. Letty will have to face off with an enemy using all of the skills she’s learned over her life to not only save the day, but reach the end of it alive.

I’ve loved Sandford’s Letty Davenport character since her first appearance in the Prey series. She was a compelling character then and a complete badass now in her first solo outing. The way Sandford builds the partnership between Letty and Kaiser is expertly crafted from their initial resistance to their meeting of the minds as a team that makes both of them better. I loved these two together. I also love Letty’s practical nature. She doesn’t shy away from who she is and what she’s done in life.

When you take all that and add in a story that is both real-world topical and packed with thrills aplenty, The Investigator is another home run from John Sandford that will have readers begging for more Letty adventures.