The Town: 3 1/2 Stars
Oline Cogdill
When a crime fiction novel makes it to the big (or little screen), there's always the fear, for those of us who care about these things, that what made the novel so good will be lost in translation.
The Town, directed by and starring Ben Affleck as a bank robber, proves that capturing the spirit of a novel is more important than following a crime fiction book to the letter. 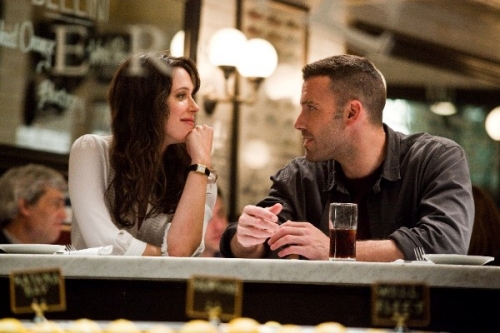 And The Town, based Chuck Hogan's novel Prince of Thieves, does just that. Hogan's excellent 2004 novel about friends moonlighting as bank robbers featured a gripping sub-plot about their neighborhood changing from blue-collar to upscale. The men could barely control their anger, prejudice and anxiety as wealthier, more educated yuppies moved in, making rents higher and turning corner bars into martini bars.
In the Hammett Prize-winning Prince of Thieves, their life of crime had an undertone of rebellion based on classism, their way of showing that they were just as good as those with more money and more education -- and still in control.
The Town works so well because it remains faithful to the essence of Hogan's solid novel. The movie never wavers in showing how a person's background influences who he becomes, and the strength and inner resolve a person must have to rise above that background.
Affleck, who co-wrote the script, does Hogan's novel proud.
Both The Town and Prince of Thieves share energetic story-telling, characters worth caring about, a faithful sense of place, and neither resorted to the cliche of honor among thieves.
Charlestown, the blue-collar Boston neighborhood that Doug MacRay (Affleck) and his friends grew up in, has produced more bank and armored-car robbers in one square mile than anywhere in the U.S. Doug and his crew are just following the family business in their planned-to-the-second robberies. The men have an air of futility about them, stuck in the same kinds of lives that their parents endured. This is further driven home when a local crime boss says, while prepping them for the next big robbery, that he sees their fathers' faces in each of theirs. 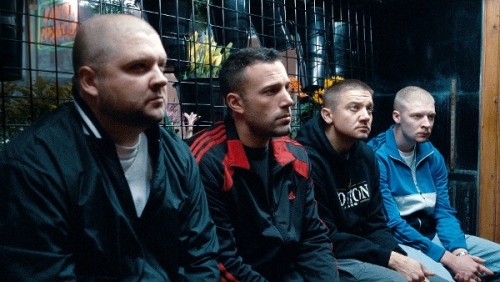 During a robbery, Doug and his buddies take a hostage -- bank manager Claire Keesey (the excellent Rebecca Hall from Vicky Christina Barcelona) whom they later release. When the gang later learns that Claire lives about four blocks away, Doug offers to find out how much she remembers about the robbers. But for Doug, this is not just another job. He falls for Claire and wants a real relationship with her. Dating her without giving himself away is one problem; the other is leaving his life of crime without betraying his friends.
Meanwhile, FBI Special Agent Adam Frawley (Mad Men's square-jawed Jon Hamm), relentlessly gathers evidence to arrest Doug and his crew. Looking scruffy with days'-old beards, Hamm proves his acting skills convert well to the big screen.
Affleck's direction is flawless as he depicts Doug and crew following the only career path they believe they are capable of. He pulls first-class turns from each actor, making each a part of Boston streets. A Boston boy himself, Affleck's affection and affinity for the area shine as he did directing the excellent 2007 Gone Baby Gone, based on fellow Bostonian Dennis Lehane. Affleck shows the neighborhood's nuances and how it fits into the bigger scheme of Boston.

The Town reaffirms what a good actor Affleck is, best at playing off-kilter characters. The man once proclaimed America's sexiest by People magazine tamps down his looks for a gritty, world-weary view. Doug is a man of action and his angst never seems cliched. Affleck's Doug once had a chance to leave the neighborhood when he was recruited to play pro hockey but self-destructed during his first season. He knows that Claire is his second -- and only -- chance left to change his life or he may end up killed or in prison like his father. Oscar-winner Chris Cooper steals his one breath-taking scene as Doug's father serving several life sentences.
The chemistry between Hall and Affleck is realistic and we understand why Doug will do anything to be with this centered, intelligent woman. An even more intriguing relationship is between Doug and his ex-con friend Jem skillfully played by Jeremy Renner. An Oscar nominee for The Hurt Locker, Renner portrays the seething violence his character carries, full of rage, even when he is simply watching TV. Raised together, Jem and Doug are as close to brothers as either has had in their lives and they depend on each other. But that doesn't mean that Jem will forgive any hint of betrayal.
Rated R for strong violence, pervasive language, some sexuality and drug use.
Captions: Rebecca Hall as Claire Keesey and Ben Affleck as Doug MacRay; Up against the wall are, from left, Slaine as Albert "Gloansy" Magloan, Ben Affleck as Doug MacRay, Jeremy Renner as Jem Coughlin and Owen Burke as Desmond Elden. Photos courtesy Warner Bros.
Bros. Pictures.
the-town-3-12-stars
1550