Come Out to 'the Glades'
Oline Cogdill 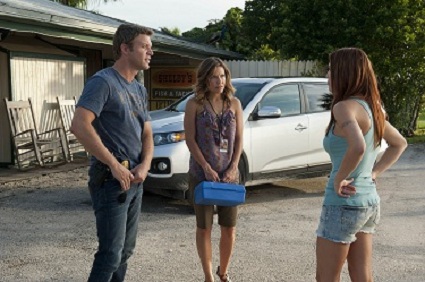 Everyone thinks that the mystery writers from their state are among the best.

And they would be right.

Therefore I can say without prejudice that Florida mystery writers are among the best.

Florida is hot, both literally and in terms of the good stories that come from the Sunshine State.

And mystery/suspense television series also have discovered Florida. Magic City, which just wrapped up its first season on Starz; Burn Notice, a personal favorite; and the short-lived The Finder.

And we also have The Glades, which just started its third season on the A&E Network. The Glades airs at 9 pm Eastern and Pacific time; 8 pm Central time Sundays. Longmire airs immediately after at 10 pm.

The Glades follows a predictable pattern of the cop shows that are part comedy, part drama. Take one quirky cop—in this case Jim Longworth played by Australian actor Matt Passmore—who on the surface may be a goof-ball, and actually is to a certain degree, and is difficult to handle. But he also is a brilliant detective who sees through the facades of the criminals.

Team him up with a more serious and also brilliant partner—in this case the local medical examiner Carlos Sanchez (Carlos Gomez)—who is more involved with the nitty gritty of investigation.

This balance of intuitive and science has worked since the time of Sherlock Holmes. And while The Glades will never be mistaken for anything by Sir Arthur Conan Doyle, the TV series does have a high entertainment factor.

The set-up may be predictable and the plots are not all that deep. But the mystery keeps viewers guessing until the end, and The Glades is blessed with sharp writing and appealing lead characters. 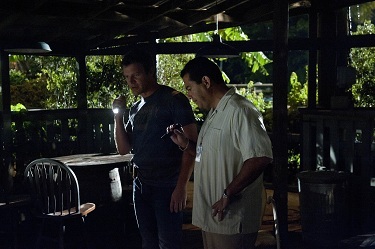 Passmore is quite easy on the eyes and an appealing actor. He moves like a man who is confident in his investigative skills, yet doesn't have to work that hard to be right. Jim Longworth would rather be on the golf course than at a crime scene and this laid-back attitude works well for the Florida that the producers are trying to show.

The backstory is that Jim was a Chicago policeman who moved to Florida after being shot by his captain who suspected the detective of sleeping with his wife. Jim was innocent of that accusation of adultery and was able to leave with a good settlement.

He came to the fictional town of Palm Glades as an agent with the Florida Department of Law Enforcement (which does exist). But Palm Glades isn't the nothing-ever-happens-here kind of place. The crime level seems equal to that of Chicago.

This third season is off to a good start. Jim finally is in a real relationship with Callie Cargill, played with a sexy intelligence and warmth by Kiele Sanchez. When they first met, Callie was a nurse trying to put herself through medical school and raise a 12-year-old son while her husband was in prison for armed robbery. Now Callie is free to be with Jim, but the job market is tight and she may have to consider relocating to work.

Jim also will have work problems when Jennifer Starke (Taylor Cole), the ambitious FDLE bureau chief, is sent to find out why the Palm Glades station has such a high success rate. Of course, this is because of the lone wolf Jim, who will bristle when the bureau chief tries to get more involved with the investigations.

In the season premiere, Jim and Carlos investigate the death of a millionaire who left all his money to an UFO organization, instead of to his much younger wife. The second episode deals with the death of a mermaid from a Florida attraction.

The Glades is shot, partly, in Pembroke Park, a town in Broward County where Fort Lauderdale is located. While The Glades captures the spirit of South Florida, it is not as accurate as the Miami-based Burn Notice.

The fictional Palm Glades is indeed fictional. It seems to be located in the south central part of Florida but it is very close to the ocean, the Everglades and major cities. The detectives once traveled to Tallahassee, located in northern Florida, at a record speed. Those waterfront restaurants and beach bars look great, and actual restaurants and bars are used, such as Le Tub (great hamburgers) and Cap's Place (reached only by boat), though they are not located as close together as the show suggests.

The producers work hard to find actual local sites, including such hyper-local references to the towns of Tamarac and Coral Springs. And the shots showcase Florida's beauty. The Palm County FDLE office is actually the Hollywood Arts & Cultural Center, which is listed as an original Florida Historical home site. Look for Doris' Market, one of the best independent grocery stores and delis in South Florida, in the first episode of this third season.

Jordan Wall, who plays lab tech Daniel Green, recently held a fundraiser for the Crohn’s and Colitis Foundation, which brought out many of his castmates.

Regardless of where Palm Glades is supposed to be located, The Glades showcases Florida's beauty and its eccentricities. After all, Jim Longworth isn't the only quirky aspect of Florida.

The Glades airs at 9 pm Eastern and Pacific time; 8 pm Central time Sundays on the A&E Network. Longmire airs immediately after at 10 pm.