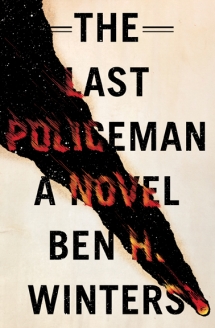 Normally, only Stephen King and Dean Koontz can suck me into a book and not release their stranglehold until I, exhausted from lack of sleep, have turned the last page. Now another writer has joined their ranks.

In The Last Policeman, an asteroid named Maia rushes toward the Earth on a course to destroy all life. Society suffers a mass nervous breakdown in the face of the coming apocalypse, but New Hampshire detective Hank Palace just keeps on keeping on. He’s not interested in joining the Bucket Listers who desert their jobs to go fly-fishing in Canada, or the Hangers, who give in to depression and hang themselves from the nearest stationary object. All he wants is to do his job, which in this case means finding out if the latest Hanger really was a suicide. But the higher-ups at his station aren’t interested. Since billions will soon be killed, worrying about the early demise of one sad Hanger seems pointless to them.

Bucking the mood of global fatalism, Hank steadily amasses one clue after another, not only proving that the Hanger’s death was indeed murder, but along the way, falling in love with a beautiful woman. Love in the face of certain death? No problem, Hank decides. He might as well go out on a roll.

To say this book is extraordinary is to make an almost laughable understatement, but yes, it is extraordinary—as well as brilliant, surprising, and, considering the circumstances, oddly uplifting. Writer/theologian C.S. Lewis once said, “If the ship is going down, dress in your best clothes, climb onto the mast, and go down with all flags flying.” That’s our Hank. My only criticism of The Last Policeman is that it can’t be the beginning of an outstanding series. Or can it? In the best of all soon-tobe- destroyed worlds, Maia’s collision course will slow enough to give Hank time to solve more cases.

Society breaks down in the face of the coming apocalypse, but Det. Hank Palace just keeps on keeping on.