Online Exclusive
The Lost Ones 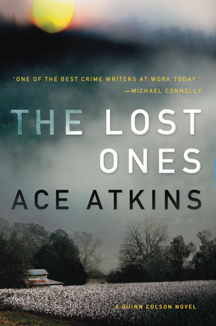 The versatility that Ace Atkins demonstrates in Lullaby, his continuation of Robert B. Parker’s Spenser series is also on display in his intriguing novels about Quinn Colson, a former US Ranger who has returned to his small Mississippi hometown.

In this series, Atkins skillfully melds the police procedural with elements of the western for a gripping, action-packed tale about the contemporary issues of war veterans and small-town corruption. Quinn is a Shane-like character, returning home after a tour of duty in Afghanistan to find the town of Jericho rotten with corruption. The Ranger, the first in this series, earned Atkins an Edgar nomination. The sequel, The Lost Ones, delves even deeper into the corrosive nature of the unscrupulous as Atkins again balances extreme action with solid character studies.

As the newly elected sheriff, Quinn has been trying to clean up Jericho and Tibbehah County. But the battle continues. Johnny Stagg, Quinn’s rival for the job, is determined to see him fail and, as president of the board of county supervisors, controls much of the purse strings for the sheriff’s office. Johnny also has been bleeding the county dry, making sure that sweetheart deals come to his enterprises, which include a profitable truck stop where, amid the fuel pumps and snack foods, prostitutes and drug dealers thrive.

But there are bigger threats. Gun dealer Donnie Varner, who bears multiple scars from his time as a soldier in Afghanistan, is selling stolen Army rifles to ruthless Mexican drug gangsters. Donnie doesn’t understand just how far out of his league he is as the gang, which is creeping into the South, increases its orders and he becomes infatuated with the girlfriend of its violent leader. Meanwhile, an abused toddler leads Quinn and his head deputy, Lillie Virgil, to a bootleg adoption scheme. As the two cases intensify, Quinn joins forces with an attractive FBI agent.

Atkins delivers a powerful, ripped-from-the-headlines plot without overloading The Lost Ones.

Quinn’s Ranger training affects each aspect of his life as he balances his duties to the law and his concern for the people and the hometown he once tried to leave behind. The tough choices he will make about Donnie are tempered by Quinn’s acknowledgement that he could have easily ended up as adrift and lost as his old friend. A childhood incident involving Quinn and his now unstable sister, Caddy, gives us further insight.

Even Johnny is less a villain than a man consumed by greed and pride. A big shot in Jericho, Johnny is the brunt of jokes outside the county lines.

A native of Alabama, Atkins understands the beauty and ruggedness of the South, especially rural Mississippi, where he lives with his family on an historic farm outside of Oxford. Here, the changing seasons are signaled by cotton gins running, and a moonlight drive on the Natchez Trace passes by “thick humps of Indian mounds and long stretches of virgin oak and pine.”

Atkins’ talent has been evident since Crossroad Blues (1998), the first of his four novels about Tulane blues historian Nick Travers. As a crime reporter for the Tampa Tribune, the research he did on the murder of an aging Florida gangster during the 1950s earned him a Pulitzer Prize nomination and inspired White Shadow, the first of his four historical novels. Atkins’ thorough research and skillful plotting also shine in Devil’s Garden, which illustrates the role Dashiell Hammett played in the trial of silent film comic Fatty Arbuckle; Infamous, the fictionalized exploits of Depression-era gangster Machine Gun Kelly; and Wicked City, a look at a corrupt Alabama town set in 1954.