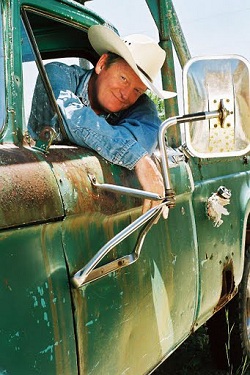 May is a big month for Craig Johnson, author of the Walt Longmire novels.

A Serpent’s Tooth, the ninth in his series about the Wyoming sheriff, just hit the bookstores and reading devices.

Longmire, the TV series based on Johnson’s novels, begins its second season at 10 p.m. (EST) Monday, May 27, on the A&E Network.

We caught up with Johnson to discuss his novels and the TV series.

What myths about Wyoming do you hope your novels dispel?
You always hear about the West being a place where people take care of their own problems and that everyone stands alone, but the history of Wyoming doesn’t really indicate that. In the most desolate areas of the frontier, even today, people count on each other more than they do in cities. In urban areas people have the resources so that they can ignore each other, but in ranching communities people depend their neighbors more—just try and have a calving or a branding by yourself… I think that’s why I made my protagonist, Walt Longmire a sheriff—he’s emblematic of a community that works together. 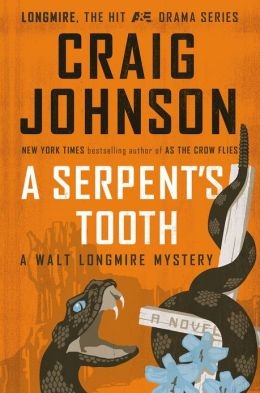 Are there issues unique to Wyoming that you explore in your novels?
Sure, we have some fairly unique issues here connected to the energy business, ranching and tourism, but my secret weapons are Wyomingites who can be a strange bunch and are pretty proud of it. People always ask me if I ever worry about running out of ideas and I always ask them, “You’re not from Wyoming, are you?”

You also do well in other European countries? Any ideas why?
I think it’s the same reason as with the French; there is still a romantic allure to the American West; open spaces like Wyoming just don’t exist in Europe and for them the idea of vast, uninhabited space is ultimately intriguing.

What is the oddest or funniest think you’ve come across in researching your novels?
Generally it’s the stories I get from sheriffs and sheriff deputies from all over the country. With the popularity of the books and the TV show, I get a lot of stories from those guys and I have to come clean and tell you that the more outrageous tales in my books are true. Inevitably, somebody will write me and say, “That story on page 167 is a little over the top, don’t you think?” And I tell them, “Well meet Sheriff Goody Pickering of Big Horn County, Montana, who actually had that happen.”

Westerns in film and on TV seem to have vanished but mystery authors such as yourself seem to be keeping the American western alive. Why do you think the western is thriving in fiction?
Well, there’s one TV show that’s doing pretty well… (Longmire was the highest-rated, scripted drama in A&E’s network history) I don’t know about thriving in fiction, but if there is such a thing I think it’s a case of readers looking for something different; you can turn on the TV or roam through a bookstore and see 50 New York or Los Angeles novels for every one that takes place in the West. It might be that people are getting tired of the CSI/Armani-suit thing. But I think it always comes down to the writing; if you try and write the best book you can, readers might be more inclined to respond no matter where it’s set.

You always manage to add a good dose of humor to your novels. Why?
Anybody who’s ever had a tough job knows that’s how you get through the day; sometimes it’s just a question of laughing or crying. Walt Longmire is a truly tough guy, and the toughest people I know have the keenest senses of humor.

What makes you laugh?
My wife, Judy, she’s the funniest person I know—scathing, but funny.

How did you come up with the character of Walt Longmire?
I was looking for the guy who I could count on—Walt Longmire is the man I want pulling up behind me from running off the highway in a blizzard or worse.

Are there any changes you wished you’d made to Walt’s character but are now part of the series and can’t change?
Nope, not a one.

What kind of feedback do you get from your readers?
The emails I get most are the ones telling me I’m beating up on Walt too much and need to take it easy on him in the next book. The other is, “There was not enough of (insert Henry Standing Bear, Vic Moretti, Lucian Connally, Dog, etc.) my favorite character in your last book.

How different from the novels is the TV series?
Not a lot, other than they backed up their point of entry into the stories a few years before my first book, The Cold Dish—that, and everybody is better looking than the people in my head…

Has the TV series drawn on plots from your novels?
Bits and pieces, some more than others, but what I appreciate is that when the do borrow plots from my books they change the endings, that way the books and the TV show don’t take anything away from each other.

Walt and Henry are Wyoming natives, but why bring in a city slicker like Vic?
I thought the books needed an urban voice, something to put in counterpoint to the dominant rural chorus of the books, and I have to admit that it was one of the smartest things I did; that, and surrounding Walt with an ensemble of strong-willed females.

Some authors have had tours created around their characters’ environment. Will we ever have a Walt Longmire tour of Wyoming?
There are already some smaller ones from some of the local colleges, chambers of commerce and the Wyoming Office of Tourism—but anybody is welcome to show up in Buffalo, Wyoming and have lunch at the Busy Bee on Main Street.

Is there a book – fiction or nonfiction – that is a favorite?
About Ed Ricketts, the forward to Steinbeck’s Log of the Sea of Cortez. It’s only about sixty pages long, but I love it.