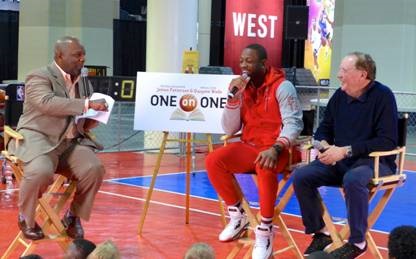 Mega-bestseller James Patterson cares deeply about the future of literacy in this country.

And he has been working for literacy.

Last month it was announced that Patterson will be giving $1 million to independent bookstores to help support them. Details here.

For the second year, Patterson and NBA all-star Dwyane Wade will team up for the webcast "One on One" promoting reading for children, emphasizing “the importance of reading for success in life,” according to the press release.

The webcast will air on Thursday, April 24, at 1 p.m. EST. The webcast is free to schools, libraries and individuals. Visit jamespattersonevents.com to sign up. Patterson and his publisher, Hachette Book Group, will be donating about 1,500 books in conjunction with the webcast.

This year, Patterson and Wade will be joined by NBA players LeBron James, Stephen Curry, Terrence Ross and Dirk Nowitzki.

A collaboration with NBA Cares, the Wade’s World Foundation, ReadKiddoRead and Hachette Book Group, the webcast will include interviews with superstars LeBron James, Dirk Nowitzki, Stephen Curry and Terrence Ross.

Each player will discuss how reading helped them reach the very highest heights in their careers.

Dwyane Wade and James Patterson are highlighted in an in-depth conversation with six-time Emmy Award winner and Miami Heat courtside reporter Jason Jackson on how reading has changed their lives and made their megawatt careers possible. And, viewers will see interviews about reading with real middle school students from John Dibert Community School of New Orleans.

In a release, Patterson explained why he choose this project: “Dwyane and I agree on this: getting kids reading will save their lives, especially those at-risk,” James Patterson said.

“That’s why we’ll be visiting (by webcast) as many schools as will have us. Dwyane and I are shooting for 100 percent literacy in our schools.”