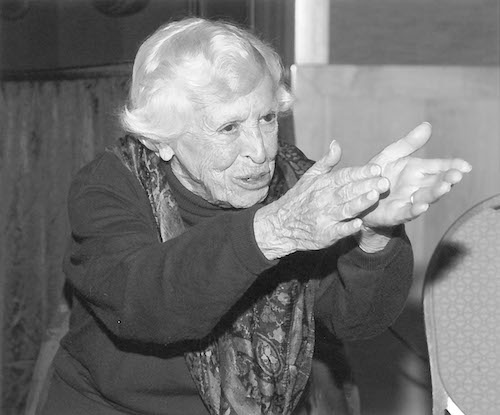 Dorothy Salisbury Davis celebrated her 98th birthday on April 26, making her arguably the oldest living American mystery writer. She is also one of the genre’s very best practitioners, one whose approach to crime fiction was once described by her friend and protégée Sara Paretsky as having “an awareness of how easy it is for ordinary people to do nasty and wicked deeds” and “[a rich] understanding of the human condition that is missing from most contemporary crime fiction.”

For years I had a dim awareness of Davis’ life and work, glimpsing her at the Edgar Awards in 2007 and seeing her name mentioned in mystery magazines as a major force, but it wasn’t until I began collecting stories for my anthology of domestic suspense fiction, Troubled Daughters, Twisted Wives, that I delved into Davis’ oeuvre in a serious manner. What I found backed up the plaudits and confirmed the hosannas: Davis truly understood the complicated nature of human behavior, and how otherwise ordinary people could tumble down the proverbial rabbit hole of sin, temptation, and weakness to commit murder—and keep the reader’s sympathy throughout.

Davis, born in Chicago and raised on dairy farms in rural Illinois and Wisconsin, was adopted and did not learn the truth of her parentage until she was well past middle age. Those hidden origins, contrasted against an otherwise happy childhood, may have led Davis to writing mysteries, though not before several professional detours as a research librarian in the advertising world, a magic show promoter, a director of the benefits program of a major meatpacking company during World War II, and later, as an editor for The Merchandiser magazine. Davis was also active in local theater, and met her husband, the character actor Harry Davis, when he was assistant stage manager for the production of The Glass Menagerie that eventually landed on Broadway. 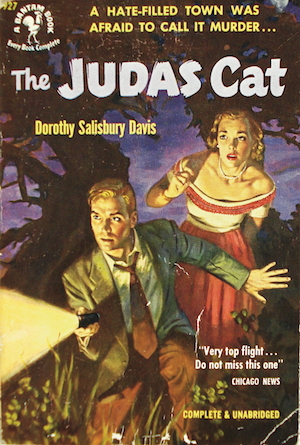 Three years into her marriage, Davis published her first novel, The Judas Cat (1949), with Scribner, who remained her hardcover publisher for the rest of her career. Already many of the themes that would recur in Davis’ work—the seemingly close-knit small town populated with flawed but relatable people undone by a murder, and then the corrosive aftermath—appear in this debut, which is set up by a nifty locked-room mystery: How did 92-year-old Andy Mattson die violently in his house with only a cat as witness, and possibly as culprit?

But locked-room mysteries weren’t Davis’ main concern. She was much more interested in the psychology of regular people, especially women of all ages, like the thirtyish spinster Hannah in A Town of Masks (1952), whose timid manner boils over in a murderous, yet justified way, or the elderly matriarch in The Clay Hand (1950) who rules her small town using fear and hatred, yet is herself undone. She also brilliantly captured the downward spiral of a teenage-boy-turned-hoodlum in both Black Sheep, White Lamb (1963) and The Little Brothers (1973), both of which also depict New York City’s Italian-American communities with forthright compassion.

Davis’ Roman Catholicism also figured prominently in a number of her novels. A Gentle Murderer (1951), her best-known novel, begins with a tour de force of an opener, in which a young man gets off a subway in midtown Manhattan, heads for a nearby church, and confesses his mortal sin to the priest: he thinks he has killed a young woman, and he is beside himself. The priest is honor-bound to keep the man’s secret. The cop who investigates the woman’s murder must find a way to coax the information out of the priest without breaking that oath. Meanwhile, the young man finds himself the object of affection of two generations of women at the house where he lodges, and where his secrets are threatened to be discovered.

More than 20 years later, Davis twists the original opening scene of A Gentle Murderer to its near-opposite in Where the Dark Streets Go (1969), as Father McMahon, tasked with writing his weekly sermon, gets an urgent summons to a tenement basement where a young man lies dying, bloody, and stabbed, refusing to divulge his real name or his killer’s. Davis suffuses this novel, too, with an overwhelming desire for absolution in the face of multiple types of guilt. Father McMahon’s struggles become the reader’s struggles, too.

While Davis’ concerns about human behavior and social justice means her crime novels are generally sober in nature, the wicked sense of humor she’s displayed in real life comes through on the page as well. This is most especially true with her trio of novels—Death of an Old Sinner, A Gentleman Called, and Old Sinners Never Die, published between 1957 and 1959—starring the elderly housekeeper Mrs. Norris, accompanying her longtime charge Jimmie, now a Wall Street lawyer, and the police detective Jasper Tully as they investigate serious crimes with a lighthearted touch.

Davis’ humor is also on display in her last four novels, all featuring Julie Hayes, who moves from disaffected, psychoanalyzed housewife and struggling actress (A Death in the Life) to tarot card reader (Scarlet Night) to gossip reporter (Lullaby of Murder) to searching out her own birth parents in Ireland (The Habit of Fear). 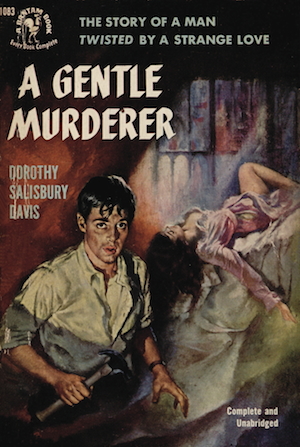 The Julie Hayes novels are difficult to pigeonhole, however. They feature one of the most dysfunctional marriages in mystery fiction, between Julie, chafing at her own lack of independence, and Jeff, the much older, condescending investigative reporter. Davis thoughtfully examines this relationship as it grows, changes, and eventually, ends. Julie is caustic, eccentric, and resourceful, but also deals with her own brutal rape in The Habit of Fear—more disturbing because Davis describes it without flourish or relish—in a “let’s get on with it” manner that does not diminish the horror. And yet, there is joie de vivre, especially with respect to the late 1970s/early 1980s New York City Davis depicts, a city in great transition that is clearly one the author loves.

While crime fiction was Davis’s primary genre, for which she garnered eight Edgar nominations—as well as the Grand Master designation by the Mystery Writers of America in 1985—she also wrote mainstream historical fiction, including Men of No Property (1956), set in Ireland during the 19th century potato famine; The Evening of the Good Samaritan (1962), set before, during, and after World War II through the vantage point of three generations of men; and God Speed the Night (1968, co-written with Jerome Ross), a suspense tale of Nazi resistance during World War II.

A number of influential writers counted Davis among their friends. She recalled, in an interview for The Daily Beast in 2013, living just two miles away from Patricia Highsmith in the 1950s, being “great friends” with Dorothy B. Hughes, and visiting Ross Macdonald and Margaret Millar in California. Davis was also instrumental in cementing Sisters in Crime as an organization to take seriously upon its founding in 1986 by joining as a board member. “She was a pioneer in speaking out for women writers and insisting that a woman’s voice was as valid, as strong, and as important as a man’s,” the noted crime writer Margaret Maron recalls.

Maron, who considers Davis to be “one of my icons,” vividly recalled her first encounter with the author during Edgar Week in the 1980s. “She came into the nearly empty room where I was and smiled at me as she bustled through (she never just strolled, she always moved quickly). I sat there dazed: ‘Dorothy Salisbury Davis just smiled at me!’”

Davis stopped writing novels after her husband Harry’s death in 1993, although she has published short stories as recently as 2009, many of them collected in In The Still of the Night (2001). Readers, luckily, can find out for themselves about the consistent excellence of Dorothy Salisbury Davis’ work thanks to the recent digital reissues of her entire body of work by Open Road Integrated Media.

Sarah Weinman is the editor of Troubled Daughters, Twisted Wives: Stories From the Trailblazers of Domestic Suspense (Penguin). She is at work editing a two-volume set of novels by American women crime writers for the Library of America.