My Book: Wouldn't It Be Deadly
D.E. Ireland 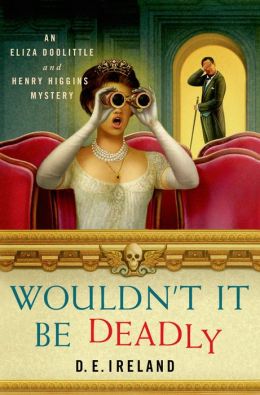 Take one witty, marvelous play by George Bernard Shaw, two longtime friends and Anglophiles, and many months of research into the Edwardian era. The end result? A new mystery series.

The two of us—Meg Mims and Sharon Pisacreta—had often talked about collaborating on a book. All we needed was the perfect idea. That idea finally materialized during one of Meg’s trips across Michigan to visit Sharon as she listened to the soundtrack of My Fair Lady. What if Eliza Doolittle and Professor Henry Higgins turned their talents to solving crime?

My Fair Lady, of course, is a 1956 Alan Jay Lerner and Frederick Loewe musical based upon George Bernard Shaw’s play Pygmalion. Eliza Doolittle is a Cockney flower girl who takes speech lessons from Professor Henry Higgins, a phoneticist, so that she may pass as a lady and help Henry win a bet.

We soon realized the story possibilities with these two characters were endless. After all, the scholarly Henry had entrée to the upper crust, while Eliza was all too familiar with London’s dangerous East End. Together they had intimate knowledge of a wide spectrum of Edwardian England. Throw in their friend Colonel Pickering’s years in India, and our series could explore suspects and victims with experience in the British Raj as well.

Despite the initial inspiration from My Fair Lady, we used Shaw’s public domain play Pygmalion as our Bible. Shaw wrote extensively about his characters after their premiere in 1913, and amended the play before the 1938 movie, adding the famous embassy ball scene where Eliza successfully poses as a duchess. We needed a victim for the first novel in our series, and this time Sharon had the “aha” moment. Shaw had served up the perfect murder victim in that scene when linguistics specialist Emil Nepommuck boasts to Henry that he makes his students pay for more than just lessons. A blackmailer in plain sight! All we had to do was kill him off and create suspects. 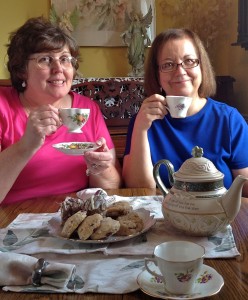 Meg Mims (left) and Sharon Pisacreta have partnered as D.E. Ireland to write Wouldn’t It Be Deadly.

Unlike Eliza and Henry, both of us are close in age and have remarkably similar backgrounds. Still, although we had published books on our own and even won awards for our writing, the idea of a collaboration seemed daunting. We had no doubt we could write the book, but would our friendship survive?

A year later, we had a finished manuscript set in 1913 London, which included all of Shaw’s beloved characters. Of course, our book added several new faces such as Eliza’s cousin Jack Shaw, a detective inspector at Scotland Yard, and Eliza’s new stepmother Rose Doolittle. We also used locations found in Pygmalion, notably 27A Wimpole Street, Covent Garden Market, and the Chelsea Embankment flat of Higgins’ mother. The story allowed us to expand the play’s scope as Eliza and Higgins explore London to question suspects and try to confirm the professor’s alibi for the time of the murder. The action concludes at the Drury Lane Theatre in a rousing performance of Hamlet that is not likely to be seen again.

Now we’re happily waiting for our debut book Wouldn’t It Be Deadly to hit the shelves. Even better, we’re still talking to each other.