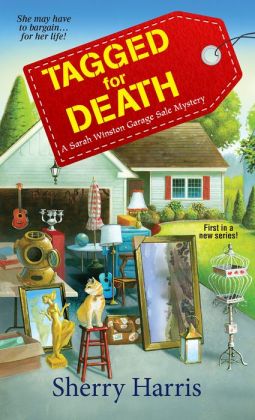 Newcomer Sherry Harris may lack an extensive publishing history, but her debut book, Tagged for Death, is anything but amateurish. Harris capitalizes on her knowledge of tag sales (otherwise known as “garage sales”) and Air Force bases to produce an engaging first mystery featuring Sarah Winston. Newly separated from her husband, CJ, who was ejected from his career in the Air Force by allegations that he had an affair with a subordinate, Sarah struggles to make sense of her life and its direction. She’s a California girl from Monterey, trying to establish her new life off-base in small-town Ellington, Massachusetts, where CJ has become police chief. Reeling from CJ’s betrayal, Sarah keeps busy by systematically visiting garage sales and sharing her bargaining techniques with friends. In fact, her prowess positions her to begin a new career running garage sales for customers. While Sarah finds her calling, the remainder of her fortunes continues to plummet, as CJ’s young paramour disappears, leaving bloody evidence of a struggle in her room on base. Worse, in one of her bags of clothing from a garage sale, Sarah discovers a bloody shirt that she had previously given to CJ. Despite feeling betrayed by CJ, Sarah knows he is no killer, so when he is arrested for alleged murder, she does her due diligence and sets about proving his innocence. She is especially skilled at breaching security and sneaking onto base, and, in the end, succeeds in her quest. Tagged for Death is skillfully rendered, with expert characterization and depiction of military life. Best of all, Sarah is the type of intelligent, resourceful, and appealing person we would all like to get to know better. Hopefully, we will have that opportunity very soon!