Nonfiction
The Golden Age of Murder: The Mystery of the Writers Who Invented the Modern Detective Story 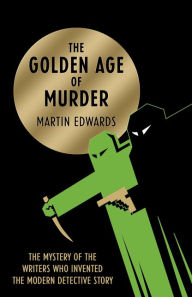 The author is archivist of the Detection Club, that exclusive organization of British writers which elected its first members in 1930. Within the framework of the organization’s early history and collective biography, personal as well as professional, of its most influential members, Martin Edwards refutes some of the reductive generalizations that have been applied to Golden Age detection, not only the British version, but more briefly the undervalued American equivalent. The focus is on the three most important figures of the British Golden Age, two written about extensively in other sources, Agatha Christie and Dorothy L. Sayers, but the third woefully neglected in recent decades: Anthony Berkeley, who also wrote as Francis Iles. Other subjects include Margery Allingham, E.C. Bentley, John Dickson Carr, G.K. Chesterton, G.D.H. and Margaret Cole, J.J. Connington, Freeman Wills Crofts, Clemence Dane, Anthony Gilbert, Milward Kennedy, Ronald A. Knox, Ngaio Marsh, Gladys Mitchell, E.R. Punshon, John Rhode, Helen Simpson, and Henry Wade. Among the surprising revelations, in 1926, Father Knox livened up the BBC with a satirical newscast that included the toppling of Big Ben’s clock tower and the hanging of a cabinet minister. Some listeners took the broadcast seriously and panic spread, foreshadowing the reaction to Orson Welles’ dramatization of War of the Worlds 12 years later.

Edwards also summarizes some of the true-crime cases that inspired these writers, adding to the value of one of the most important contributions to mystery fiction history in recent memory.