Online Exclusive
The Mystery of the Venus Island Fetish 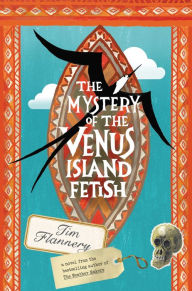 After returning from a five-year stint on the fictitious Venus Island where he lived among the natives there, young anthropologist Archie Meek returns to Australia and the Sydney Museum in 1932 with a marvelous collection of artifacts, hoping for a promotion to curator and a reunion with the young woman he hopes to make his bride. Unfortunately, things don’t seem to be working out.

Worse yet, something mysterious and possibly deadly seems to be going on at the museum. Several of the museum’s older curators have died or gone missing, and some of the 32 human skulls on the famous Venus Island Fetish mask seem to be somewhat discolored, including one with a decayed tooth that closely resembles the tooth of one of the missing curators. Is it Archie’s imagination, or is something sinister going on?

While Archie attempts to solve the mystery and regain the affection of his intended bride, the reader is taken on an extended tour of the museum, its exhibits, and the key people who keep it going and growing. We learn about the politics of museums, how museums around the world trade artifacts to keep things new, and how the Australian government interacts with them. We also learn about the indigenous people of the continent and the bloody history of how the British took control of that continent.

While the mystery itself is resolved at the end, it primarily plays second fiddle to all of the above. Not surprisingly, the author is a former museum curator who served as director of the South Australian Museum.