Books
Where It Hurts 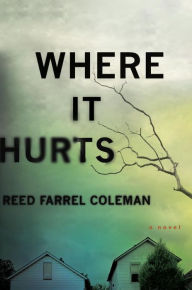 John Augustus “Gus” Murphy is a shadow of his former self. He is a retired Suffolk County police officer working at the Paragon, an aging airport hotel on Long Island, as a van driver and sometime house detective. His life unraveled two years earlier when his son, John Jr., died. He lost his wife, Annie, to divorce and he is losing his daughter to drugs and alcohol. His world is empty with grief and self-pity. It is an emptiness that erupts as anger when a petty crook named Thomas Delcamino shows up at the Paragon asking Gus for help. Tommy D.’s son, TJ, was murdered five months earlier and the police haven’t shown any interest in solving the case. Gus thinks Tommy D. is using his grief over John Jr.’s death to manipulate him, and he doesn’t let Tommy D. get far before tossing him out of the hotel.

The murder simmers for Gus, and the next day he visits the vacant lot where TJ’s broken body was found. A stirring curiosity—the first Gus has felt in two years—prompts him to help, but before he can approach Tommy D. with an apology and his offer of help, the petty crook is murdered, too. Gus is warned off the investigation by nearly everyone, police and criminals alike, but it has the opposite of its intended effect. It gives Gus purpose, and a sense of duty.

Where It Hurts is a dark, brooding, private detective novel. Its perpetual gloom deepens the atmosphere and generates an unnerving angst in the narrative that is both alluring and repulsive. Reed Farrel Coleman’s Long Island is far from the coastal tourist towns, and is as deadly and bleak as any impoverished urban area. Gus is bitter, doomed, and appealing, working-class tough, and intelligent. This is the first in a planned series and it is not for the faint of heart, but if hardboiled noir appeals, it will not disappoint.