Books
Long Upon the Land 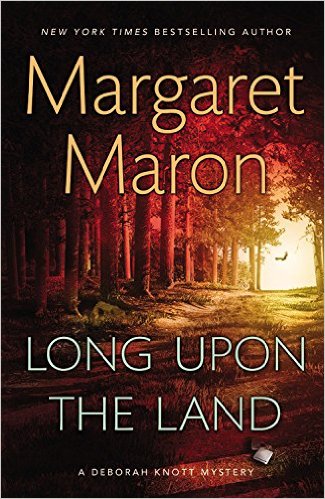 The final words of Long Upon the Land, Margaret Maron’s 20th—and as it turns out, last—Deborah Knott mystery, are these: “Full circle.”

There’s no need to attach a spoiler alert to that, but I might’ve needed to add one if I was to disclose who said those words, and to whom, and especially what prompted the saying. And I definitely would add one before discussing the many specific ways that this book gracefully brings the whole series full circle, because ideally readers should discover those storytelling turns on their own.

But suffice it to say that when you look at the novels which bookend the series— 1992’s Bootlegger’s Daughter and Long Upon the Land—many of the conflicts and concerns of the first book find both echo and answer in the final one. Stepping back further to the first appearance of Deborah Knott in the 1991 short story “Deborah’s Judgment,” you’ll find even more connections: both that story and the new novel hinge on the younger days of Deborah’s mother, Sue Stephenson Knott, and her experiences during World War II with her sister Zell and best friend Beulah in Goldsboro, North Carolina; both deal with an airman who was loved and lost; and both unearth decades-old secrets about the long shadows cast by old love affairs. In several ways, Long Upon the Land revisits and reworks twists and themes from Maron’s early works—and always in satisfying ways.

The murder mystery at the heart of the new novel strikes close to home—literally, since Deborah’s father Kezzie Knott discovers the victim’s body on his own farm, and the ensuing investigation reveals the many ties (and troubles) between the murdered man and his family on the one hand, and Kezzie and his kin on the other. (It is not the first time that Deborah’s family has come under suspicion in the books, of course.) The investigation touches on themes of domestic abuse, of rivalries within families and between them, and of what the land means to the people who’ve lived on it. The solution is ultimately a satisfying one, too—multilayered answers to the puzzle instead of a simple issue of whodunit. (Watch that cat.)

But as with many of Maron’s novels, the crime at the core of the book is hardly the biggest story or the more important mystery being explored.

As much as I’ve enjoyed each mystery in the series, looking back on them, I’m not sure I can always remember who killed whom and why in individual books. Instead, what stands out is the overarching story of these characters—these people, I should stress, since they’ve become more than characters to me. Deborah’s life and career, her relationships with her father and brothers and extended family, her romance and then marriage to sherriff’s deputy Dwight Bryant, her stepmotherhood to his son Cal—that’s what’s drawn me in as much as the crimes, that and the portrait of a North Carolina suffering from the ills of the past while simultaneously undergoing tremendous change: racial conflicts, immigration issues, the high costs of development, and right on down the line.

Particularly with Deborah’s family in mind, the special appeal of Long Upon the Land is discovering more about Deborah’s mother, her past, and the beginnings of her relationship with Kezzie. The opening section of the new book is dated “1943” and revisits World War II experiences hinted at nearly a quarter-century earlier in “Deborah’s Judgment.” The Zippo lighter that’s mentioned at the end of Long Upon The Land’s opening section first appeared in Bootlegger’s Daughter, as a cherished possession of Deborah’s mother and an item that Deborah’s brothers had fought over after her death, even though Deborah alone among the children “knew who’d given her the lighter and why she kept it.”

The Zippo had belonged to an airman named Walter McIntyre, with whom Sue had fallen “a little in love” during the war. It had been a souvenir of the airman’s own lost love—and he’d given it to Sue before shipping off to battle in Europe, never to be seen again. When Deborah finally receives the lighter herself at the start of Long Upon the Land, it prompts her to dig deeper into her mother’s past, to search out people who might’ve known her or Walter or Walter’s own lost love, Leslie, whose name is engraved on the lighter’s casing—a suicide, Deborah knew. Why did Leslie kill herself? Deborah wonders. And what had Walter and his story truly meant to Deborah’s mother? How had it sent her into Kezzie’s arms in the first place?

For readers, Maron teases out the answers to those questions by alternating scenes from 1943 to 1946, grounded in Sue’s perspective, with stories from Deborah’s present-day search. If you’re like me and you’ve followed the series for a long time, those answers, those stories, might well bring a tear or two to your eyes.

But even so, let’s not shed a tear because this book is last of the Deborah Knott novels. Even with its intense focus on a sometimes tragic past, Long Upon the Land ultimately proves an affirmative novel— and one as forward-looking as any in the series, right to that last line. Even if we won’t be reading about them, there are surely adventures still ahead for all these people.