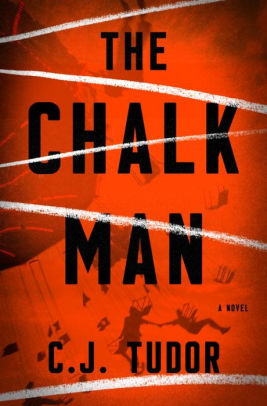 In 1986 Eddie Adams (nicknamed Eddie Munster) is 12 years old. He lives in the idyllic English village of Anderbury, and spends most of his time riding his bike with his gang of friends, Fat Gav, Metal Mickey, Hoppo, and tomboy Nicky, on whom he secretly has a crush. After Fat Gav receives a tub of chalk for his birthday, the gang comes up with a way to leave secret messages for each other using stick men drawn in chalk—different colors for each person. It all seems like harmless fun until someone outside the group leaves chalk-men messages that lead the gang to the body of a decapitated and dismembered teenage girl.

Thirty years later, Eddie (now Ed) is an unmarried school teacher, still living in Anderbury. He believes the horror of 1986 to be far behind him—the person considered guilty of the murder committed suicide long ago. But then he and other members of his old gang begin receiving cryptic stick-man messages and pieces of chalk. When people, including some of the gang, begin dying and chalk-men drawings turn up at the site of their deaths, Ed fears that he and his friends are being targeted.

Debut author C.J. Tudor has taken an innocent child’s game and turned it into a creepy atmospheric thriller that will keep readers up long after lights should be out. She skillfully weaves alternating 1986 and 2016 chapters, and her characterizations are spot on; Eddie and his friends will remind readers of their own childhood friends. Add to that a haunting ending, which most readers won’t see coming, and Chalk Man is a must-read.