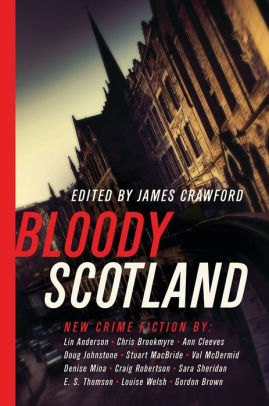 Bloody Scotland, edited by James Crawford, is an eclectic and uneven crime anthology featuring 12 stories by Scottish writers “inspired by...[Scotland’s] most iconic buildings.” Its stories range from a prehistoric Viking whodunit to a darkly engrossing adventure yarn to a clever thriller. Its best tales are original and provocative with a satisfying and often moody sense of place. Its lesser stories read more like travel brochures than fiction, but every tale in the anthology is entertaining and readable—if for no other reason than their exotic and often bleak locales. The contributors read like a who’s who of Scottish writers: Val McDermid, Stuart MacBride, Gordon Brown, Denise Mina, Ann Cleeves.

“Stevenson’s Candle” is Stuart MacBride’s take on his fellow Scotsman, Alistair MacLean’s duplicitous adventure tale where the protagonist is thrown into an overwhelming situation with too little information, no way to contact the outside world, a string of murders with a long list of suspects, and a high level of adventure. Denise Mina’s “Nemo Me Impune Lacessit” is a brilliantly executed tale of suburban noir. When a family, along with their troubled 11-year-old boy Jake, visits Edinburgh Castle an odd thing happens. Jake’s behavior shifts from his normal extremes—violent, angry, uncontrollable—to that of a normal preteen, but Jake’s transformation is as disturbing as was his bad behavior. My favorite tale in the anthology is Ann Cleeves’ tight, clever, and completely entertaining “The Return.” While vacationing, a woman meets her intellectual idol and like a dream they get on well, at least until everything changes. A perfectly told psychological mystery, it has a similar vibe to those brilliant stories by Patricia Highsmith, with more than a little irony and a smile-inducing climactic twist.