Books
If I Die Tonight 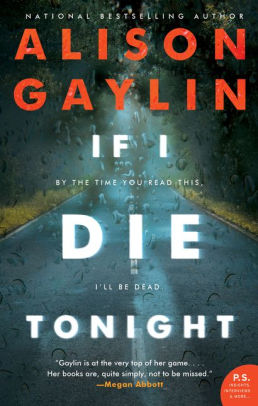 This riveting read about a  family in distress begins with  17-year-old social outcast Wade  Reed hacking his mother’s Facebook page to post, “By the time  you read this, I’ll be dead.” The  story then jumps back to five  days earlier, when the late-night  calm of a small-town New York  police station is disrupted by a  sobbing woman, Aimee En, who  tells Patrol Officer Pearl Maze  that her Jaguar has just been  hijacked by a teenage boy, who ran over and killed another teen who was coming to her rescue. The would-be rescuer was Liam Miller, a local football star—and the hijacker? Well, it looked a lot like sad, lonely Wade, dressed, as he was, in a black hoodie.

It doesn’t look good for Wade. His mother, Jackie, heard him sneak out of the house that night, and his little brother, Connor, caught a rain-drenched Wade hiding something in his room at 4 am. To make matters worse, Wade refuses to say where he was, even if it means clearing his name. Very quickly, social media brands Wade as the murderer. But one person won’t give up on him: his mother Jackie. Even as the evidence mounts, she never falters in her faith in her son as she sets out to prove his innocence.

Luckily for the Reeds, Officer Maze also has doubts about Aimee’s story right from the beginning, which strikes her as having too many implausible claims. For instance, why did Aimee have the driver’s window down on a cold, stormy night? As author Alison Gaylin lays out the evidence via multiple viewpoints, the truth of what happened slowly clicks into focus. Especially strong are the voices of Maze, who has a past which she wants to keep secret, and Wade’s mother, Jackie, whose love for and fierce protection of her children is poignant. If I Die Tonight is an excellent outing from this three-time Edgar nominee.