Books
Down the River Unto the Sea 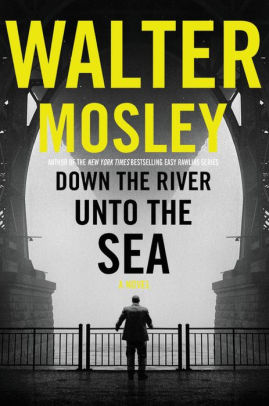 From the opening blast dedication (“For Malcolm, Medgar, and Martin”), Walter Mosley makes it clear which side of Black Lives Matter he’s on, but the complexities and ironies of the author’s take on society raise this ambitious, defiant standalone far above any simple slogan. Because, of course, life is infinitely complex, and no issue is ever simply black and white—not in Mosley’s world, and certainly not in ours.

Our hero, Joe King Oliver, may be black, but he’s also blue. Or at least he was. A shaky frame-job and the resulting scandal cost him his career in the NYPD, his marriage, and a brief but harrowing stint in Rikers that left him deeply scarred—both inside and out.

Now Joe’s a broken man, a disgraced former cop trying to squeeze out a living as a private eye with an office on Brooklyn’s Montague Street. The sole saving grace in his still tentative new life is that Aja, his precocious teenage daughter, has stuck by him, even acting as his sometime office manager, and trying to keep dear old dad out of trouble. But that all changes when Joe’s hired by a disillusioned young legal researcher, Willa Portman, to try and gather evidence to help an incarcerated street activist accused of cold-bloodedly gunning down two of New York’s finest.

Then Joe gets a call from the woman who framed him years ago, begging forgiveness, and claiming she wants to make things right. Or does she?

The two separate cases allow Mosley to tear into the heart of our current malaise, where “over and over again, the almighty dollar proves its superiority;” where institutional racism, political corruption, and identity-based ignorance spreads like the cancer it is. But Mosley digs even deeper, slicing into the guts of those caught up in it all, and the heavy toll it takes on their souls, leaving nobody’s sins, lies, and betrayals unexplored, and nobody—particularly Joe—unscathed.

Yet, for all his noble intentions, Mosley occasionally steps on his own message, allowing cartoonish elements to creep in, such as Joe’s too-cool-to-be-true office/apartment arrangement, or the activist who goes by the awkward moniker of A Free Man, alternatively referred to by others as “Manny” and “Mr. Man.” Also not helping are sudden clunks of overbearing, overwritten prose, such as, “Those few days held the most potent experiences in my life up to that point.”