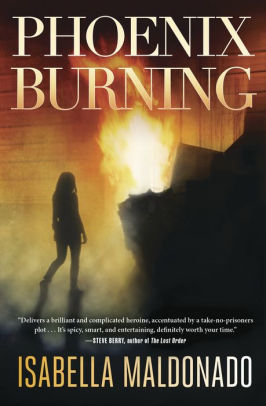 Police procedurals can be wearying if they rely too much on the bureaucratic side of policing at the expense of character development. Fortunately that is not the case in Phoenix Burning, where author Isabella Maldonado serves up one of the most fully fleshed-out police detectives I’ve read in a long time.

Phoenix PD’s Veranda Cruz, head of an anti-drug task force (after Blood’s Echo), is hiding a dreadful secret: she is the biological daughter of Adolfo Villalobos, the drug kingpin she has vowed to bring down. Phoenix Burning begins with a knuckle-biting car chase and shootout as Veranda and her partner, Sam Stark, attempt and fail to bring in Roberto Bernal, one of the Villalobos’ enforcers. Just as we begin to catch our breath, Maldonado pulls us out of the streets of Phoenix and whisks us to the cartel’s compound in Mexico, where the Villalobos siblings are vying for power. Torture is daily entertainment for them, and throughout the book we are treated to several hair-raising sessions of it.

The nasty Villalobos clan contrasts with Veranda’s large, loving family, which is gearing up for the quinceañera of Gabriela “Gabby” Gomez, Veranda’s half-sister. Although Gabby looks forward to her 15th birthday bash, she is haunted by the memory of the time she once spent as the Villalobos’ captive. Aware of Veranda’s vendetta and the danger she poses, the Villalobos family is planning to take out the Latina detective’s entire family, and Gabby’s upcoming quinceañera seems like the perfect day to do it. And as long as they’re making the trip across the border, why not take over Phoenix’s drug trade?

Maldonado’s insider’s view on the international drug wars never ceases to be riveting, partially because Maldonado—a retired police detective—has been there, done that, and has a long list of departmental commendations to prove it. But Maldonado’s books are about something even deeper than the drug trade. In a way, her books are family sagas: evil family versus good family. In less capable hands, Veranda’s family matters could have been a standard “by the way” backstory, but Maldonado’s writing bristles with urgency and authority.

Maldonado is also careful never to romanticize the men and women who make up the thin blue line. In one exchange, Sam Stark, Veranda’s partner, says, “There’s a flock of sheep out in a pasture surrounded by wolves. When the shepherd sleeps, who protects the flock?” Veranda answers, “A dog.” Nodding, Sam continues, “A dog is a close relative of the wolf. That’s why the shepherd chooses a dog to guard the flock, because it takes a predator to understand and fight another predator.” This idea of cops as predators could be off-putting, but it isn’t in Phoenix Burning. Yes, Veranda is a predator—and a particularly fierce one, too—but her love for her family and her compassion for the drug trade’s many victims reveal the heart behind the uniform.