Books
The Punishment She Deserves 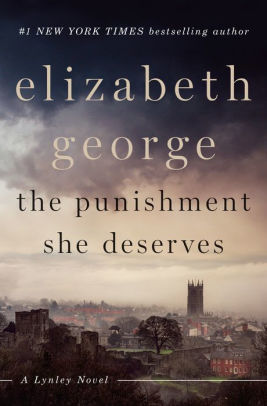 The Punishment She Deserves is Elizabeth George’s 20th Inspector Lynley novel. The superb police procedural series began in 1988 with the Anthony Award-winning A Great Deliverance, one of the finest mystery novels of the last 30 years. It introduced the “urbane, [Oxford] educated blue-blooded” Detective Inspector Thomas Lynley and his working-class partner Detective Sergeant Barbara Havers of New Scotland Yard. This latest entry is as bold, invigorating, and entertaining as the first.

In The Punishment She Deserves, Havers and Detective Chief Superintendent Isabelle Ardery have been sent to verify the apparent suicide of a deacon, Ian Druitt, in the medieval town of Ludlow. Druitt, accused of child molestation, appears to have used a part of his vestments to hang himself. Druitt’s father, a wealthy brewery owner, is not convinced, and has threatened a lawsuit, sparking the Birmingham MP to conduct its own investigation. As Havers and Ardery begin their by-the-numbers inquiry, Havers, too, begins to suspect foul play.

The investigators find themselves  in the company of two compelling secondary characters, the local police community support officer Gary “Gaz” Ruddock, and his superior, Deputy Chief Constable Clover Freeman. In addition to the suicide, the police are dealing with a town-and-gown feud over binge-drinking college students. Havers and Ardery quickly learn there are cultural clashes among families, and uncover more evidence that the suicide might be murder. Despite Havers’ insistence that they pursue the possibility, Ardery, battling her own demons (an ex-husband and alcoholism), demands they concur with the original findings.

It’s then, in part two of the lengthy but briskly paced novel, that Lynley comes on the scene. Havers shares her suspicions with him and they cover old ground to discover new clues that lead them to believe that “everyone’s connected to everyone else” in the labyrinthine plot of suicide, murder, rape, assault, and attempted murder.

It is a joy to read again about George’s engaging investigators, the incomparable sparring partners Lynley and Havers. Longtime readers will note that other characters from the series—Detective Chief Superintendent Isabelle Ardery, Assistant Commissioner Sir David Hillier, and Winston Nkata—make appearances. Simon St. James and his wife, Deborah, also make late cameos. Readers coming to George for the first time will be just as enthralled and satisfied as longtime fans of the immensely rewarding series.