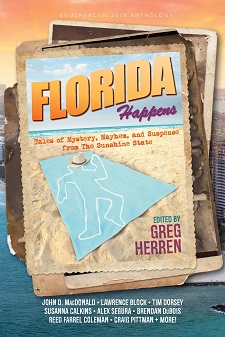 Florida is, often, a state of mind, as this well-curated short story anthology proves.

Edited by award-winning author Greg Herren, with an introduction by comic mystery writer Tim Dorsey, who writes the Serge A. Storm series, Florida Happens plunges the reader into the oddity, eccentricities, and humor that we who live in Florida sometimes take for granted.

Florida Happens is the 2018 Bouchercon anthology, an annual collection to showcase the region where the conference takes place.

This year Bouchercon will be September 6 to 9 in St. Petersburg, Florida.

As usual, a portion of the anthology’s proceeds go to charity. This year the beneficiary is Dolly Parton’s Imagination Library, a program that provides free books to children from birth to school age regardless of family income. A personal mission of Dolly Parton, the Imagination Library fosters literacy, a love of reading, and is meant to inspire children to succeed.

I think Dolly would approve of this eclectic collection that nails what life in Florida can be.

It’s interesting that many of the authors are not from Florida, or have never lived in the Sunshine State.

Hopefully, a few have at least set a foot or two in Florida.

Despite this, Florida Happens is very Florida-centric, from the descriptions of the beaches and canals to the seedy parts that seemingly rise from nowhere.

While some people may think a few stories stretch credibility, well…those people don’t live in Florida.

Frozen iguanas falling from the trees and then reviving in warmer weather? Yep, happens many a winter.

An alligator living in a canal behind a home and becoming like a pet? It happens, though most people want those gators gone.

An illegal trade in tortoises? Unfortunately, does happen.

Fake hit men? Oh, yeah, though the “customer” usually is a grandmother.

Alligators in purses? A good way to stop purse thieves.

Straight men who make a living as drag queens. Yep.

Each story is a standout, some more than others.

Here are a few of my favorites:

In Herren’s “Cold Beer No Flies,” a young man seethes with revenge in a trailer, never forgetting those slights from high school.

Susanna Calkins gives us a look at Palm Beach in the 1920s in “Postcard for the Dead."

Married retirees are energized by a vacation at a down-at-its-heels motel in Eleanor Cawood Jones’ “All Accounted for at the Hooray for Hollywood Motel.”

A selfie, a drag queen, and a distraught father interrupt an FBI agent’s weekend in Neil Plakcy’s “Southernmost Point.”

Florida is the final frontier for a runaway wife in Patricia Abbott’s “When Agnes Left her House.”

Pete Fernandez, the hero of Alex Segura’s series, has a run-in at a Coral Gables bar in “Quarters for the Meter.”

A nurse with a keen sense of justice turns sleuth in Debra Lattanzi Shutika’s “Frozen Iguana.”