(Mystery Scene continues its ongoing series in which authors discuss their works or their lives.) 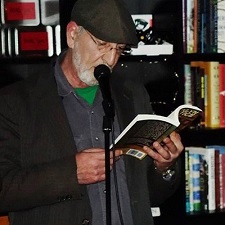 J.L. Abramo is from the seaside paradise of Brooklyn, New York, and was born on Raymond Chandler's 59th birthday.

He is the author of Catching Water in a Net, winner of the St. Martin's Press/Private Eye Writers of America prize for Best First Private Eye Novel. That novel introduced Jake Diamond. The Jake novels continued with Clutching at Straws, Counting to Infinity and Circling the Runway (Shamus Award Winner); Chasing Charlie Chan, a prequel to the Jake Diamond series. Abramo also is the author of Gravesend, Brooklyn Justice, and Coney Island Avenue, a follow-up to Gravesend.

Abramo, left, is the current president of Private Eye Writers of America. His latest novel is American History (Down & Out Books).

In this essay, Abramo discusses how the setting influences his stories.

Those readers familiar with my previous work have already visited the neighborhoods, which play an essential role in American History.

The sights, sounds, tastes, and the aromas of San Francisco are as unmistakable as they are unforgettable and provide a perfect setting for the fictional exploits of Brooklyn-born, Italian-Catholic, Russian-Jewish, unsuccessful movie actor, and marginally successful private investigator Jake Diamond.

Jake is more likely to be carrying a worn paperback classic novel than a firearm. His thirst quencher of choice is Tennessee sour mash whiskey, his favorite foods are those with the highest cholesterol, and the closest he comes to being a purist is non-filtered cigarettes.

“The scent of deep fried calamari floated in through my office window like an invitation to triple-bypass surgery.”

So begins the third novel in the Jake Diamond series, Counting to Infinity. Jake’s office sits above Molinari’s legendary Italian Salumeria on Columbus Avenue—in the heart of the rich history and the eclectic street life of North Beach.

And, in American History, North Beach is the center of the Leone family’s American story.

I lived in San Francisco during the closing years of the 1970s—post-Vietnam, post-Watergate, pre-Reagan.

First, in the Fillmore, where Diamond lived before inheriting a house in the Presidio. 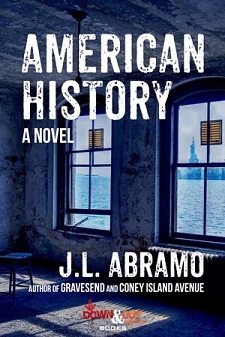 Later on Frederick Street near Masonic, a short block from Haight Street, where the last of the Flower Children were fighting to hold the line—with their head shops, music stores, and street performances—against the other thirtysomething residents who were trying to turn the Upper Haight into a respectable neighborhood.

I worked part time at the Green Apple Bookstore on Clement Street, where Jake Diamond found paperback copies of A Tale of Two Cities and The Count of Monte Cristo. Catching Water in a Net evolved into a tale of San Francisco and Los Angeles.

Automobiles are impractical in San Francisco—there is no place to put them.

As Jake Diamond once noted, “the only way to get a parking space in San Francisco is to buy a parked car.” So, I explored on foot—walking up and down the hills, from neighborhood to neighborhood, each with its unique personality and its own climate.

In 2000, in South Carolina, I began writing my second novel.

My initial attempt, a crime novel set in Brooklyn, was sitting unread—surrounded by “thanks but no thanks” form letters from an assortment of literary agents. Instead of wallowing in self-pity, I wrote. I decided to try my hand at a first-person narrative.

The natural, unpremeditated form was a private eye novel—and, in my mind, the setting could be nowhere but San Francisco.

Catching Water in a Net captured the St. Martin’s Press/Private Eye Writers of America Award for Best First Private Eye Novel and a year later I was holding a hardback copy in my hand.

Fifteen years later, after an 11-year hiatus, Diamond returned and his exploits in Circling the Runway earned a Shamus Award.

I visit San Francisco as often as possible. I walk the streets, I duck into alleys, check out storefronts, and look for additional iconic places for Diamond to discover while searching for a clue or two.

At the opposite American shore lies Jake’s hometown—and mine.

As well as the center of the Agnello family experience in American History.

After the first three Jake Diamond mysteries, set primarily in San Francisco, I felt compelled to write a Brooklyn story. To return to my roots—so to speak.

The result was Gravesend, titled for the Brooklyn neighborhood where I grew up. It was a more personal journey and the setting was a very important character in the narrative. I felt comfortable there.

Brooklyn is unique because it is Brooklyn. Where fans still lament the loss of the Dodgers after 60 years. Where Coney Island is still the summer beach resort. Where many of its three million residents still greet and are greeted by grocers, bakers, barbers, restaurateurs, and bankers by their first names in neighborhoods much like small towns.

Brooklyn is unlike other places—and is a perfect setting for crime fiction because it has such a rich history of criminal activity.

In American History, the action is set in both places over a period of nearly 100 years. The Agnello family in Gravesend, and the Leone family in North Beach.

American History is the multi-generational saga of the Agnellos and the Leones—set against a backdrop of turbulent and critical events in a young nation struggling to find its identity in the wake of two world wars.