Books
Under My Skin 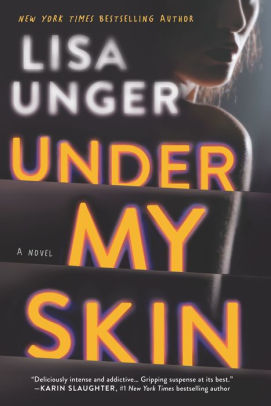 Shortly after losing her husband unexpectedly to a random act of violence, photographer Poppy Lang disappears after his funeral, only to resurface days later, disheveled, physically exhausted, with no memory of the time in between.

Poppy spends the next year trying to deaden her grief through a combination of therapy and ill-advised self-medicating. Her attempts fail miserably. And what’s more, she begins to experience a series of surreal waking dreams, which seem connected to her blackout. As her dreams intensify, she becomes convinced they are repressed memories, and sets out to determine their verity. Her search for the truth causes her to question both her everyday reality and the story of a mugging-gone-wrong that the police long ago closed the case on.

A winning blend of mystery, psychological thriller, and ghost story, Under My Skin lives up to its title, telling an intimate story of tragedy, betrayal, obsession, and secrets. Lisa Unger takes readers on a harrowing, tortuous trek through a dark mental landscape where nothing is certain. Readers, as well as Poppy, are forced to question her perceptions and determine for themselves whether she’s onto something bigger and darker than just booze, pills, and self-deception. The book is a labyrinth, full of twists and turns, but one that makes for fascinating and rewarding reading.