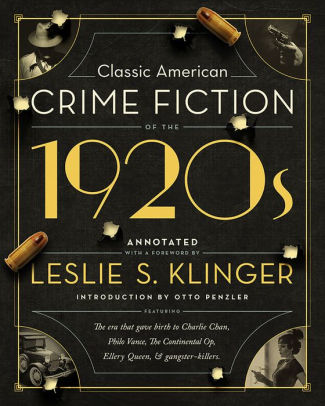 Five landmark novels from the Golden Age of Detection are reprinted in their entirety, with numerous illustrations and notes by the author of the Edgar-winning The New Annotated Sherlock Holmes and genre-related annotated editions of Bram Stoker’s Dracula and the writings of H.P. Lovecraft. Representing classical detective fiction are Earl Derr Biggers’ first Charlie Chan novel The House Without a Key (1925), S. S. Van Dine’s introduction of Philo Vance in The Benson Murder Case (1926), and Ellery Queen’s debut, The Roman Hat Mystery (1929). Also from 1929 are Dashiell Hammett’s Red Harvest, representing the hardboiled private eye pioneers, and W. R. Burnett’s Little Caesar, an early classic of the gangster novel. The texts follow the original book editions; if later editors made changes in the interest of political correctness, it is noted in the annotations.

Among the added features to further illuminate the novels: an account of the first screen Chan film, a 10-chapter 1926 serial, Van Dine’s 20 rules for classical detective stories; several period photographs of Butte, Montana, the city on which Hammett’s Poisonville was based; and Burnett’s introduction to a 1957 edition of his novel.

Which novelist gets the most annotations? It’s Van Dine in a runaway with 164, including identifications of Vance’s learned allusions to art, music, literature, and religion, plus his many tossed-off quotations, often in languages other than English. It all bears out Julian Symons’ opinion, as expressed in his history Bloody Murder, that Vance displays more “real intellectual attainment” than his fellow g-dropping contemporary Lord Peter Wimsey. Inclusion in this book may get some contemporary readers to try Van Dine, whose early novels at least are not as humorless as sometimes thought. I find it hard to believe that the annoying character of Philo Vance wasn’t to some degree tongue in cheek.

Biggers should also get some new and deserved attention. Those who believed him to be a stereotyping racist or his work an egregious early example of “cultural appropriation” may learn the error of their ways.