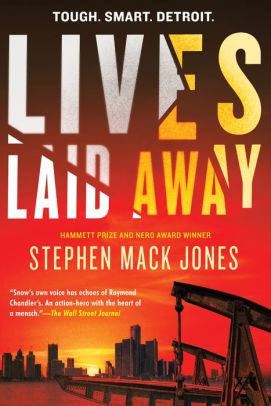 I had high hopes for Stephen Mack Jones’ sequel to his Hammett Prize-winning debut, especially when I heard his biracial DC private eye August Snow was going to tackle the immigration crisis. The boomer in me figured the time was ripe for an in-depth, ripped-from-the-headlines rabble-rouser—some real “tin soldiers and Trump is coming/we’re finally on our way” agitprop.

Unfortunately, while Lives Laid Away is undeniably a political book, I’m not quite sure what its politics, if any, are. It does toss out some hand-wringing sympathy for the whole mess, and frets over the sharp rise in overt racism, but it’s mostly backdrop. Snow, a former Marine and a self-identified “Blaxican,” sued the Detroit Police over his wrongful termination and pocketed $12 million.

“Yeah, I have money,” he shrugs. He’s plowing it back into Mexicantown, restoring and flipping houses, investing in his beloved ’hood like some inner-city yuppie version of Bruce Wayne. He makes his own salsa, loves his green leather sofa, slips a few bucks to neighbors in need, and works—when he wants to—as a private investigator. So everything’s peachy keen, right?

Not exactly. Lately Chevy Suburbans from ICE are trolling the streets at night, and people are disappearing. Presumably deported. But then the corpse of a local girl, who disappeared during a ICE raid a few weeks earlier, is pulled from the river, dressed in Marie Antoinette drag.

Snow, along with his gun-toting godfather Tomas (playing a geriatric version of Hawk to his Spenser), decides to look into it. But before it’s over the terrible twosome will have to endure a swamp of corruption, hate and greed in an almost comic-bookish conspiracy seething with human traffickers, Neo-Nazi bikers, and rogue government agents. Plus an eyebrow-raising amount of violence—including a little torture and murder casually committed by the “good” guys.

What we get is not some gritty nail-biter that lifts the lid and gives us a good look at the works, so much as an old-fashioned, guns a-blazing ripsnorter—and boy, are its pulp roots showing. The wish-fulfillment hero, the lunkheaded violence, and self-serving justifications recall nobody so much as Carroll John Daly’s infamous, trigger-happy vigilante gumshoe Race Williams, who made his debut in the special Ku Klux Klan issue of Black Mask in 1923.

There are few answers provided here, and fewer questions asked. But boy, do the bodies pile up!