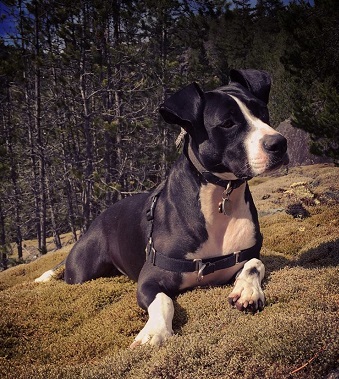 Authors often base a character on a composite of people they know; some use just one individual and then fictionalize that person’s life.

And of course, names of real people often pop up in novels because they’ve bought the privilege of having their name used as a character.

Owen Laukkanen has a different approach in his latest novel, the superb Deception Cove.

He bases one character on someone he knows very well, and also uses her real name for the character.

In fact, he lives with her—his dog Lucy.

In Deception Cove, Laukkanen’s real-life Lucy becomes the fictionalized Lucy, a wonderful dog who is the center of the novel.

We have no doubt that the real Lucy is just as wonderful.

Deception Cove, the launch of a new series, does have human characters in it, too.

One of those characters is former Marine Jess Winslow who suffers from a severe case of PTSD. Lucy has been Jess’ only salvation. The dog can tell when Jess is about to have an attack or is having a nightmare and offer her comfort.

The other main human character is ex-convict Mason Burke, who trained Lucy while he was behind bars. This dog also was his saving grace.

Lucy gave both Jess and Mason hope for the future, something to believe in and a reason to get up. Lucy offered unconditional emotional healing.

When Lucy is in trouble—and, believe us, she is never harmed—Jess and Mason have a new goal and team up to save her. 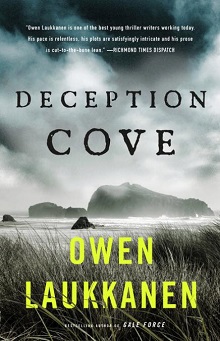 Laukkanen describes the fictional Lucy as “a mutt, probably pit bull but not entirely; she had that square, blocky head and that big dumb pit smile 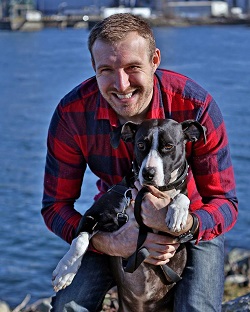 when she panted, but her body was long and more lean than stocky. A boxer, maybe, or some kind of retriever. Her hair was short and fine jet black save a white shout and a stripe up her forehead, a patch on her neck and her belly, white socks on all four paws and another patch like paint on the tip of her tail. She was a rescue….”

That pretty much describes Laukkanen’s real Lucy, right down to her past as a rescue.

In the acknowledgement section in the back of Deception Cove, Laukkanen thanks the RainCoast Dog Rescue Society “for bringing the real Lucy into my life.”

Lucy was found in a California kill shelter “with only days left to live,” he writes.

She was “scooped up and brought to Canada and into my life, for which I’ll be forever grateful.

"RainCoast rescues and rehomes dogs from all over the world, and their work is in every sense a labor of love,” he adds.

For more information, or to donate as Laukkanen mentions, visit www.raincoastdogrescue.com.

And, of course, read Deception Cove, a terrific launch of a new series.