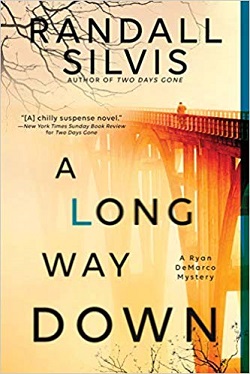 So I was especially interested to see how Randall Silvis briefly weaves in Chandler in his novel A Long Way Down.

And I promise no spoilers—just a beautiful homage to Chandler.

Ryan is a reader and his hometown reminds him a couple of times of Raymond Chandler.

Driving from stoplight to stoplight, Ryan is reminded of a phrase Raymond Chandler has used “the big sordid dirty crooked city. Chandler’s Marlowe preferred it over small-town life, but DeMarco was no Philip Marlowe, and he knew it. Any similarities were only skin-deep. He was more like Chandler himself, a man whose spirit and heart were gradually crushed by the city.”

Ryan proves quite the Chandler fan, as he often relies on the author, and Marlowe, to guide him.

Later on, Ryan remembers the quote “I test very high on insubordination,” which Philip Marlowe had said in The Big Sleep.

“The quote had always pleased DeMarco. As did Nabokov’s observations that curiosity is insubordination in its purest form.”

“. . . the word komorebi came to him then, a word he had read long ago, probably in a novel by Yukio Mishima, that fine Japanese writer. . . . A single word to describe the way sunlight streamed through leaves on a tree.