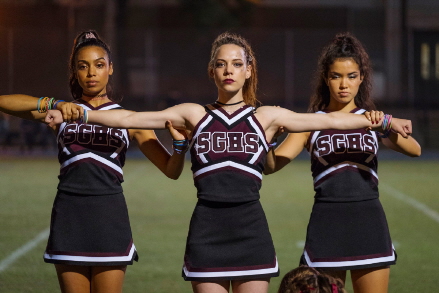 Some of the best television series are on cable networks—many of these programs outshine movies.

Case is point is Dare Me, a 10-episode series now airing Sundays on USA network and based on Megan Abbott’s 2012 novel about the friendships, rivalry, competitiveness, and betrayal among teenage cheerleaders.

Abbott’s novels often focus on the intense obsessions can rule a teenage girl’s maturation. Cheerleading is an insular world and any imbalance allows jealousies and secrets to emerge.

The teens become unbalanced when Colette French (Willa Fitzgerald) is hired as the new cheerleading coach.

Suddenly, Addy and Beth are no longer the top girls, nor the captains as Collette gets rid of those positions. Beth instantly hates the new coach who she sees as threat to her power—“She’s 28! She’s ancient,” she says. But Addy is in awe of the coach, which fuels Beth’s jealousy.

Dare Me illustrates the demands that cheerleading imposes on the girls who are pushed to physical and psychological extremes. Bruises and injuries are business as usual. At Sutton Grove, the cheerleaders have always outshined the football players and Colette has been hired to make the team into champs at any cost. Colette’s ambition is just as ruthless as are Beth’s and Addy’s. 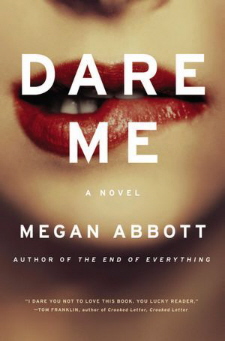 “There’s something dangerous about the boredom of teenage girls,” Addy says at the beginning of the first episode. These girls are never bored—they don’t have time—but they can be dangerous.

The dynamics of Colette and her squad play out in a variety of ways. None of the girls have strong, solid families, though Addy’s mother, a cop, comes close. At home, the girls have little power. On the field, they have it all.

Beautifully photographed, the camera lingers on the faces of the girls as they go through their routines, deal with each other and maneuver their way in a world they think they understand but really have no idea what is going on. Each of the young actresses is a standout

While Abbott’s novel was a standalone, the TV version is supposed to be an ongoing series. This could easily work, especially with Abbott’s influence. Abbott adapted the scripts from her novel and is listed as a producer. Dare Me’s screen version keeps the spirit of the novel, complete with its noir atmosphere.

I hope we get to spend several seasons with these cheerleaders.