At the Library with Con Lehane
Oline H Cogdill 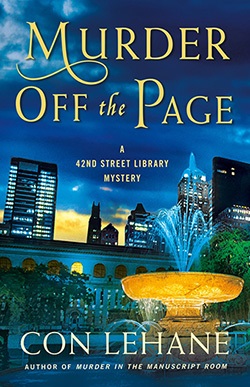 I love the stacks of books, organized so well. Libraries are full of possibilities, of worlds not explored, of words waiting to be read.

As a child, I spent many wonderful hours in my hometown library, the Mississippi County Library in Charleston, Missouri.

When I went there it was a small, two-room building. But now, thanks to a generous donor, the renamed Clara Drinkwater Newnam Library is a large beautiful building.

It was in that tiny library that I expanded my love of mysteries, finding new, well, new to me, authors.

That hometown library is where I also first learned about the New York Public Library at Fifth Avenue and 42nd Street at Bryant Park.

A library that big—unfathomable to me.

And the two lions out front—nicknamed “Patience” and “Fortitude”—were beyond comprehension to me. A couple of years ago, I was invited to attend Sue Grafton’s memorial service held at the library in a beautiful room not always open to the public. Sue Grafton would approve.

Thank to Con Lehane’s excellent series, I can continue to discover new aspects of the New York Public Library.

In Murder Off the Page, Raymond begins an investigation after getting a note from his friend, bartender Brian McNulty. The stakes increase when a second murder also is linked to Brian in this third installment of his library series.

Lehane’s series takes us into the corners of the library and also spots in New York City many don’t know about.

His library series grew out of another series Lehane wrote about bartender Brian McNulty. When that series ended, his editor suggested he write a new series set at the 42nd Street Library.

“[His editor] liked how I wrote about New York City and thought setting a mystery at one of the city’s iconic institutions would allow me to write about the city—and about books and librarians,” Lehane said in an email.

The library setting seems tailor made for Lehane, who has worked as a college professor, a union organizer, a labor journalist, and has tended bar at two dozen or so drinking establishments.

“I’ve loved libraries and frequented them (not quite as much as I’ve frequented bars) all my life,” he continued in the email. “I remember vividly the first time I visited a library as a first-grader.”

But despite his love of libraries, he said he didn’t feel comfortable trying to create a librarian character because “I don’t know librarianship, so I created a curator—a subject-area specialist.”

So like a good librarian would, Lehane dug into research to create his new series hero.

“First, Raymond Ambler was a historian; then, I changed his occupation to crime fiction specialist. I’d been interested in the idea of doing research in special collections for a while.”

His interest in special collections led to a pilgrimage or so.

“A decade or more ago, after reading Tom Nolan’s biography of Ross Macdonald and meeting and talking with Tom, I made a couple of visits to the Ross Macdonald/Kenneth Millar—actually the Margaret Millar—collection at the University of California Irvine and browsed through Ross Macdonald’s notebooks, so this might have been in the back of my mind also.”

By the way, here’s a bit of trivia about those lions guarding the New York Library.

The lions’ original names were Leo Astor and Leo Lenox, which was in honor of the library's founders. Then they were called Lord Astor and Lady Lenox. That doesn’t really work since both lions are supposed to be male.

The names Patience and Fortitude came during the in the 1930s from by Mayor Fiorello La Guardia. The legend is he chose the chose the names because he felt New Yorkers needed those qualities to endure the Great Depression.