Online Exclusive
All Kinds of Ugly 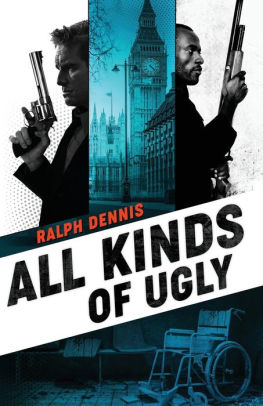 Back in the '70s, Ralph Dennis (1931–88) cranked out 12 books featuring Atlanta private eye Jim Hardman, and his go-to guy and drinking buddy, Hump Evans. They came, rode the paperback waves for a while, and then disappeared.

Too bad—Dennis was a fine writer, a master of believable action and surprising heart, with characters who could dish out the tough guy banter with the best of them. And, at a time when the PI genre was still awakening from the Big Sleep of the Tighty-Whiteys, the idea of a black-and-white team of PIs was fresh, bold, and maybe even revolutionary. Oh, sure, Bob Parker had Spenser and Hawk, but by the time Hawk showed up in the series, Dennis had already cranked out seven or so books featuring Jim and Hump.

Unfortunately, the Hardman books were published (and packaged) as Men’s Adventures—those numbered paperback odes to sex, violence, and front-of-the-brain thinking that were all the rage, churned out by a cadre of writers often hiding behind corporate pen names. Fans of the genre, however, generally weren’t looking for what Dennis was dishing out, and mystery readers who might have appreciated them weren’t even aware of their existence. Those few who were aware—or were turned on to them years later—loved them for what they were: smart, compassionate private eye novels that could easily go 15 rounds with any of their contemporaries.

Which is why it was such a blast when crime writer (and Hardman fan) Lee Goldberg nailed the rights, and brought the original dirty dozen back into print under his own Brash Books imprint a few years ago, with introductions by Joe Lansdale, another huge fan of the series.

But even more amazing? Brash has just unleashed the thirteenth and final entry in the series, based on The Polish Wife, an unpublished manuscript by Dennis. There’s an interesting afterword by Goldberg on how he found it and transformed it into All Kinds of Ugly, a far more Hardman-like title.

Ugly’s a beauty, though; a pure distillation of grade A, hardboiled pulp that dares to reaches for more. Jim’s not getting any younger, and his long-term girlfriend Marcy has finally dumped him. Heartbroken, he accepts a case from a wealthy, elderly industrialist, Harrison Gault, that takes him to London on the trail of the old man’s missing grandson, Harrison Gault III, but it’s a bust—the man is dead. Instead, Jim brings his attractive young widow, Anna Piroski, back to Atlanta. She’s pregnant. With Harrison Gault IV.

The old man insists on welcoming her into the fold, and Jim figures that’s that. But the trouble-prone Anna has gotten under his skin. Despite his best efforts, he's reluctantly drawn back into her messy life, a noirish (and very seventies-ish) swirl of bad choices, bad drugs… and violence.

But underneath it all floats the enduring friendship of Jim and Hump, the foundation upon which the series is built, as the two hard-drinking middle-aged losers (Jim’s an ex-cop, Hump’s a former pro football player) try to deal with a hard and confusing world, trying to take control of their own lives.

It’s a fitting conclusion to a series that coulda/shoulda been a contender.