Books
Murder at the Mena House 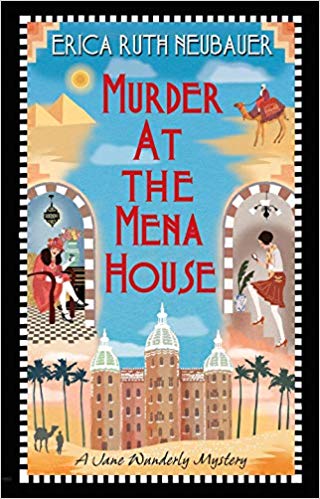 When young American widow Jane Wunderly accompanies her aunt Millie on a trip to Egypt in 1926, the last things on her mind are romantic entanglements and murder, but both turn up in this very engaging mystery. Not long after she arrives at her luxurious hotel, Jane is the first to discover the body of a young woman with whom she had a brief public spat the evening before. As a result, she is one of the chief suspects of the local constabulary.

Complicating matters further, she becomes the romantic target of several interesting men. Can she trust any man after the disastrous experience with her former husband… and, if so, which one? And what about the friendly young couple she recently met who seem to have an inordinate amount of luck at the gambling tables? Then again, why is her aunt seemingly ignoring her and spending nearly all of her time with two young women she recently met? As another murder occurs, and her own life is put in jeopardy, Jane decides to do her own investigating as a matter of self-defense.

In addition to the very engaging mystery itself, I really enjoyed the vivid descriptions of the plush hotel and the surrounding area. The highlight for me was Jane’s visit by camel to the pyramids and her experience within the oldest and largest pyramid, Cheops. It was very much like actually being there.

Although the case itself is a complex one, there are enough clues to give the reader a chance to discover the murderer. All in all, a very good start to a new historical mystery series.

MysteryScene RT @AgnewRobin: https://t.co/Xr6BPJXfkS Loved getting to interview Vanessa Riley about her new book, MURDER IN WESTMINSTER, the first in a…
4h • reply • retweet • favorite