Lori-Rader Day, Little Luck, a Lot of Revision, and a Whole Bunch of Talent
Robin Agnew 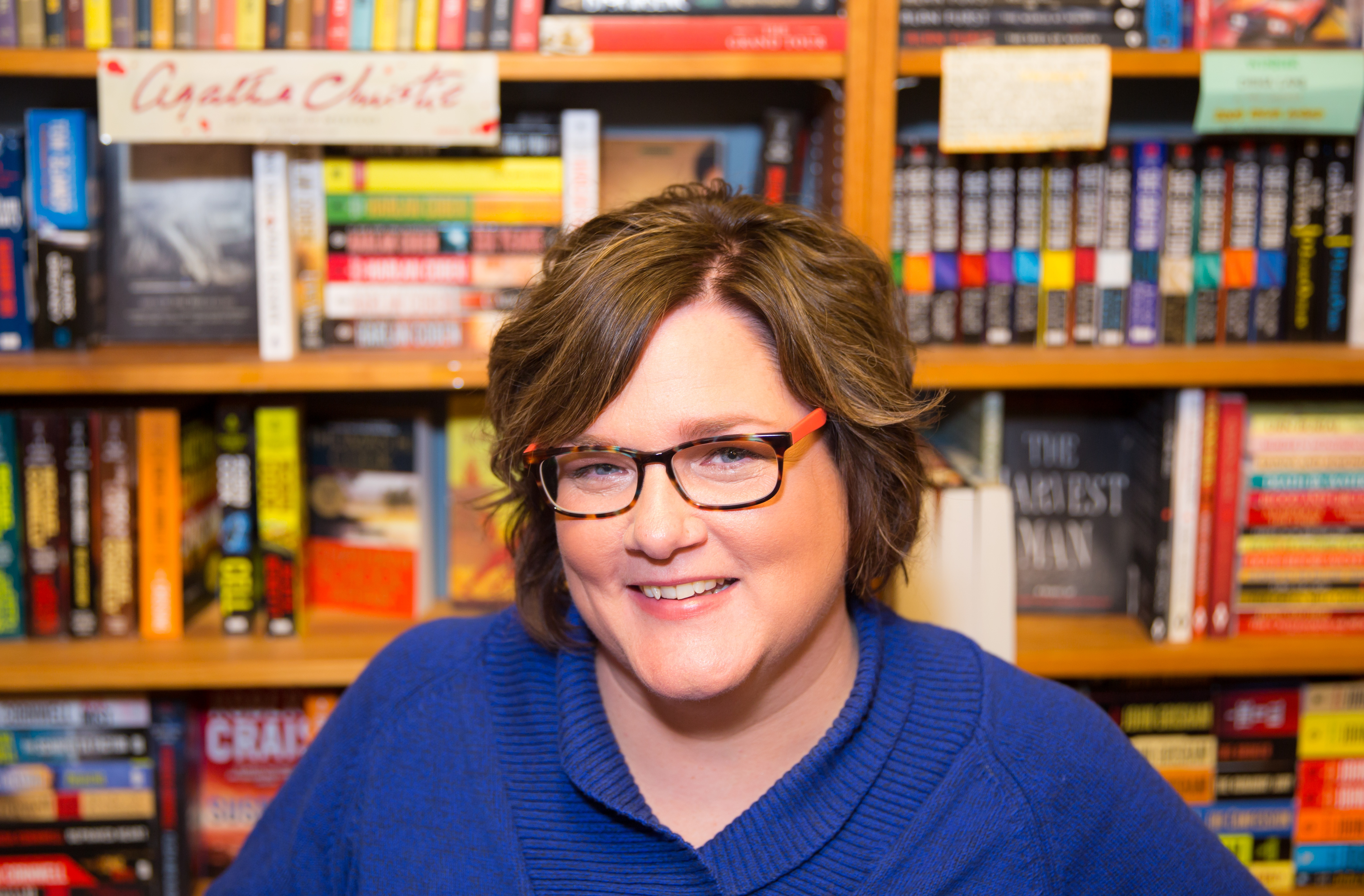 In her five-novel career, Lori Rader-Day has been nominated for the Anthony, Edgar, Mary Higgins Clark, Anthony, Barry, and Macavity awards.

Rader-Day has won two of the most prestigious, taking home an Anthony Award and the Mary Higgins Clark Award. When I finally picked up book three, The Day I Died (2017), I became a fan of her cleverly set up and beautifully written psychological thrillers. Her new book, The Lucky One, was published in February 2020 and it may be her best yet. She recently took the time to share with Mystery Scene a bit about her writing and the new book.

Robin Agnew for Mystery Scene: Many of your books seem, to me, to be about a quest for identity on the part of the main character. Can you talk about why that's important to you as a writer?

Lori Rader-Day: The search for identity is just the kind of story I like to read. Maybe it has to do with my own psychology? It seems to me, though, that most stories are about a search for self on some level or another—what choices will a character make, based on what they learn about themselves? That’s just what story is. Maybe you’ve pinpointed the elusive line where stories transcend the genre (emphasis for sarcasm). If they engage with that question, they transcend this invisible line so many claim to see.

In The Lucky One , you write about two characters, both on a quest for identity. Was it difficult to write two, rather than one, central character and keep both of their different issues on the front burner, so to speak?

The difficulty of this story was definitely magnified by having the two protagonists, both looking for something they can’t admit they need. In some ways, Alice and Merrily are very different people, but they were also almost the same age, grappling with some of the bigger questions about where they were in their lives and who they might turn out to be. The difficulty becomes, How do I as the author make sure each character seems like herself and not just like the other? So they had to have different backgrounds, different family structures, different interests, desires, disappointments, and grief. That’s the fun part, though. Pacing them through their own story arcs was the challenging part.

You write psychological thrillers, but your books also have a strong traditional mystery element, the thread of which seems especially tricky in The Lucky One. I imagine there's a different intellectual discipline involved in putting together the pure mystery element. Can you talk about that a bit?

I think you have pinpointed the narrow ledge of what constitutes one of my books and why my publicists probably despair of me. Are they mysteries? Are they thrillers? Am I a marketing nightmare? I just tell stories the way I want to read them, and the way I imagine an average person might experience them. That’s probably the thriller part. The mystery part is the spine of the story that has brought us to this thriller-ish moment and then the investigation (such as it is) to find out what’s happened and why. I can get quite caught up in trying to make my characters sleuth, but they usually don’t want to do that. They want the truth, but they are much more interested in why things are the way they are than how they find out any one clue.

I've heard you talk about setting yourself a "challenge" as you write—something I know Agatha Christie, for one, did as well. (She was challenged to write the trick in Murder of Roger Ackroyd, for example, by her brother-in-law). Do you always set yourself a different challenge? And if so, what favorite challenges have you set for yourself?

I have said a few times too often perhaps that I give myself “intellectual exercises” for each book. Does that sound pretentious? I should stop saying that. The exercise for The Lucky One was to write in third person, something I had never done successfully for a novel draft. It was interesting to try, and it generated some of the book’s best bits, I think. I’m not sure how I could have told it any other way, but that’s hindsight, having the story twist and turn as it did. For Under a Dark Sky, I wanted to challenge myself to have an Agatha Christie-level of suspects. That was a sincere challenge, to have six to eight people in all the major scenes—to keep track of them, to understand how they are feeling and reacting to whatever is happening. We should give Agatha a lot more credit for pulling that off. And if anyone thinks they can know whodunit from the very beginning of that book, well, congratulations, because I didn’t know until I wrote the end.

What's your favorite part of writing a book? What gets you excited to get up every day and keep going?

I am in no way the kind of person who is excited to get up every morning, to do anything. My cup of tea. That’s it. Or a deadline. Deadlines have magical powers to wake you up. What makes me get to work is the story I haven’t quite figured out, but it’s a matter of the story bothering me, begging to be told.

I rely heavily on revision. Revision as I go along, and after some time away, revision after I’ve written the first draft. By the end of the revision process, I will hate revision and never want to speak its name again, but I do enjoy going to work on a drafted manuscript and making the sentences, the story better right before my own eyes. It’s very satisfying.

The Lucky One hinges partly on a site called The Doe Pages, an online group of folks looking for lost or dead relatives and friends. Is that a real website? How did you discover it?

The Doe Pages is based on the Doe Network, a real site for real online amateur sleuths. We talk about amateur sleuths all the time, but in a much cozier, cheerful, cats-on-the cover sort of way. I was interested in the real people who do this sort of thing, often on top of working jobs and raising families, and often getting results, hard-won results. I had heard about and was fascinated by the story of Todd Matthews and “Tent Girl,” a Jane Doe who was found in Kentucky in 1968. Matthews took the case over from his father-in-law, who discovered the body, and solved that 30-year cold case after ten years of effort, making connections in early internet chat rooms and forums. Today Barbara Ann Hackman Taylor has her name back, and a marked grave her family can visit. I interviewed Todd Matthews for The Lucky One, and now we’re email friends looking forward to talking in person for the first time on stage at Killer Nashville in August.

The hook for The Lucky One is pretty world-class. Can you talk about how the central inspiration came about?

The idea originated with a conversation with my new neighbor, an adorable young mother who announced one day that she had been kidnapped as a child. That certainly got my attention, and started the story of Alice Fine, kidnapped as a child and returned safely (as my neighbor had been, as well). I had been casting around for story ideas and considering a story among the real online sleuths who solve long-cold missing persons and unidentified cases. I had been shopping Doe Network for inspiration when I recognized a face, the face of a girl who had gone missing from my childhood neighborhood. I hadn’t forgotten her, but I was surprised to see her still missing and accounted for on this site.

The story for The Lucky One started to form from those two concepts. Alice Fine is a low-level volunteer, playing at giving back, when she sees a face she recognizes, and it’s the face of her kidnapper, who was never brought to justice.

What writers have been influential to you? What book was transformational?

So many authors have made a difference in the writer I’ve become. Early favorites were Beverly Cleary, Judy Blume, Lois Duncan, E.L. Konigsburg, and then Agatha Christie and Mary Higgins Clark. The first transformational book was one of Cleary’s, because noticing her name on the book made me realize, at age six or seven, that people wrote books.

One book that was transformational for me was Christopher Coake’s We’re in Trouble. Chris is a high school friend of mine, and when he published his debut collection of stories in 2006, I realized people from where I’m from could write and publish books; they just had to do the work. I took that opportunity to do the work, seriously, for the first time.

Transformational by content? Probably Flannery O’Connor’s A Good Man Is Hard to Find, which blew my mind. I didn’t realize stories could be like that.

What's up next for you? What are you working on now?

I’m currently revising my first historical, set partly during World War II and based on a little-known bit of history when a group of children evacuated from London lived in Agatha Christie’s summer house, Greenway. I have never done this kind of intense research before, and it’s against my nature to do so, but it’s been an interesting challenge. No firm title or date yet, but it will be out, I believe, early summer 2021. This is an idea I had years ago and I kept waiting for someone else to write it. I’m excited finally to share it with everyone.

Lori Rader-Day is the Edgar Award-nominated and Anthony Award- and Mary Higgins Clark Award-winning author of Under a Dark Sky, The Day I Died, Little Pretty Things, The Black Hour, and The Lucky One. She co-chairs the mystery conference Murder and Mayhem in Chicago and serves as the national president of Sisters in Crime.