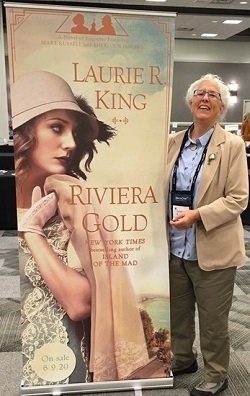 A couple of weeks ago, Mystery Scene reported that Laurie King was offering a character name in her next Mary Russell-Sherlock Holmes novels to raise funds for Second Harvest.

King’s fundraiser ran for several weeks and closed out on April 15.

And it was a success.

According to Second Harvest, in addition to the winning bid in the name-a-character auction, quite a few people donated sums outright, "which was lovely of them," added King.

The fund-raiser netted a total of $6,000, which will go toward helping Second Harvest continue its mission.

According to Second Harvest, that $6,000 will pays for 24,000 healthy, balanced meals on the Central Coast.

"And yes, anyone who wants to continue to donate would be supporting a literally life-saving cause," added King.

According to its website, Second Harvest distributed close to 8 million pounds of food in 2018-19 through over 200 partner agencies and program sites across Santa Cruz County. Of that, 60 percent were fresh fruits and vegetables–that comes out to more than 5,000,000 pounds of produce.

For more information on Second Harvest, visit the site.

The last time, she believes, was The Language of Bees, which came out in 2009. For more information about King’s fund-raiser, visit my previous blog
“It can be really tricky to fit them into historical novels,” King said previously.

The character name will appear in King’s novel scheduled for the summer of 2021. This book will take place immediately after Riviera Gold, which comes out in June 2020.

The next novel will be set in the summer of 1925, and the setting will be Transylvania. That setting along conjures many ideas.

The winner asks that he be just referred to as Alan B—and those wanting to now his full identity will have to wait until the book comes out next year..

In this stressful time, we love to hear stories about people helping others. If any other authors are having fund-raisers, let us know.