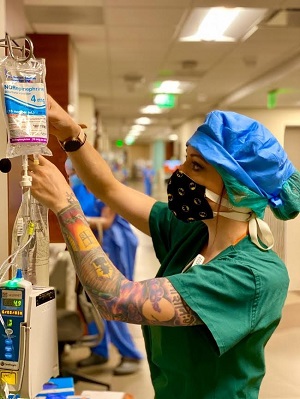 The partnership of Minotaur Books and Mystery Writers of America has a given readers some provocative new authors to enjoy with its First Crime Novel Competition.

The annual First Crime Novel Competition provides a previously unpublished writer an opportunity to launch his or her career with the Minotaur Books imprint. The winner will receive a one-book, $10,000 contract.

The contest became in 2008 with Stefanie Pintoff, whose In the Shadow of Gotham went on to win MWA’s Edgar Award for best first novel by an American Author.

The winner of the 2020 competition is Rebecca Roque, left, a nurse working in Phoenix, Arizona. Her winning novel, tentatively titled Till Human Voices Wake Us, will be published in 2021.

According to the press release, Roque’s novel opens when Alice, the best friend of 17-year-old Silencia “Cia” Lucero, is found dead from a supposed suicide. But Cia knows three things must be true: Alice is dead, Alice could not have killed herself, and Alice, a budding journalist, must have found something. Cia is determined to solve the mystery Alice left behind.

Roque’s winning novel certainly will have a higher readership than her first venture in publishing. She sold her first book at age five to her mother for some red Skittles. Roque’s resume includes an intensive care unit at a busy metropolitan hospital, a juvenile detention center, a comic book shop, and several craft beer bars.

The press release added that Roque “is constantly inspired by the lived stories of people from all walks of life, and believes in the power of tattoos and stories to bring down walls between people.”

In announcing the winning novel, Kelley Ragland, Vice President, Associate Publisher for Minotaur Books, stated “With a remarkable voice and a diverse cast, the book is an engaging mystery about the life of a town as well as the life of one teenage girl. And when we found out that Rebecca is also a nurse currently working on the frontlines of the COVID crisis, we were even more honored to be able to work with this amazing writer on her debut novel.”

While the first novel competition is an annual event, there have been a couple of years during which a winner has not been named, making the final choice even more coveted. And this competition has produced some terrific writers.