Everybody Counts or Nobody Counts to #SaveIndieBookstores
Oline Cogdill 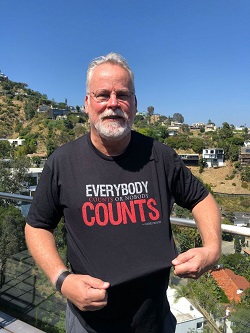 “Everybody counts or nobody counts” is a refrain of Harry Bosch, the hero of Michael Connelly’s novels.

For the LAPD detective, this phrase is his mantra illustrating Bosch’s mission in solving murders.

“Everybody counts or nobody counts” also has worked as a slogan on T-shirts sold during campaigns to raise funds for worthy causes.

#SaveIndieBookstores campaign was a partnership of James Patterson, who donated $500,000, the American Booksellers Association and the Book Industry Charitable Foundation (Binc).

The campaign, which began April 2, 2020, and was to end April 30 but was extended to May 5, raised $1,239,595 to support independent bookstores, Bookselling This Week reported. The “Everybody Counts” campaign ended at the same time.

All the money raised will be given to independent bookstores, who are encouraged to apply for a grant.

For previous essays on this campaign, visit the Mystery Scene blog.

Sales of the “Everybody Counts or Nobody Counts” T-shirt have been launched three other times to raise money for worthy causes. “We will likely run it again at some point for another good cause, or do a new design,” said Jane Davis, the website manager of www.michaelconnelly.com.

Speaking from personal experience, the “Everybody Counts or Nobody Counts” T-shirts are quite nice and high quality. I bought one for my husband a couple of years ago. We’ve taken ours all over the country, when we could travel, and it has held up through numerous washings. 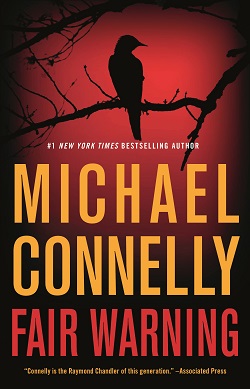 In support of #SaveIndieBookstores campaign, Connelly posted this comment:

“We are all struggling under the threat of this pandemic. We’ve lost people, others are sick. People have lost jobs, businesses have closed. While the front line of this war is being heroically fought by our health care workers and first responders, all of us around the world are doing the best we can. The future is uncertain other than the certainty that we will get through this together.

“Harry Bosch says everybody counts or nobody counts. I think he would agree that every bookstore counts, too. The DNA of our society and culture is in our books, our stories. I want to help make sure the places and people who put those books in our hands get through this difficult time."

In Fair Warning, Connelly returns to his journalist Jack McEvoy, who first appeared in The Poet, in 1996; then in The Scarecrow, published in 2009.

Bosch will return, just not yet.

Connelly’s next novel The Law of Innocence will focus on defense attorney Mickey Haller and is scheduled to be published November 10, 2020.